Energy: the reckoning to come 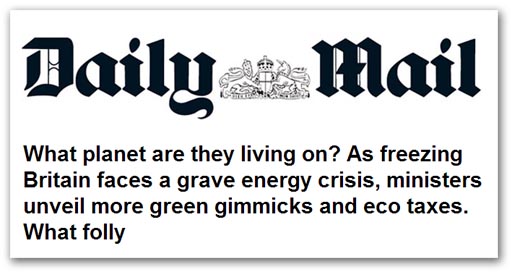 As gentle flurries of global warming descend again from the skies this morning - turning into a steady cascade - Booker writes in the Daily Mail on one of his favourite subjects – the coming energy crisis.

There is no meeting of minds here. We are dealing with energy secretary Ed Davey. He refuses to see past his own departmental propaganda, into the real world, and simply repeats his mantras, not budging an inch.

Cue then the Daily Telegraph which gives him space for an authored piece, telling us that "coalition policies are not only about tackling climate change, diversifying supply and creating jobs, but also about saving money on bills too". And the Telegraph thinks we are going to pay for this sort of guff via a paywall?

But, if this doesn't take the biscuit, we have Labour's energy spokesman Caroline Flint, who roundly criticises the energy policy, declaring that, "the Government's underhand attempt to mask the real impact of its policies on families' energy bills is shameful".

Yet this is the same Labour that, under Ed Miliband, launched the Climate Change Act, with the near-unanimous support from all sides of the House. When it comes to energy policy, therefore, there is not much to chose between the lot of them. They are as bad as each other.

Sadly, that typifies modern politics. There are only a very few policy issues where there are any real differences, and those differences are not enough to make the difference. All parties are tarred with the same brush. Effectively, that leaves most people with a feeling of powerlessness, and explains why so many are walking away from the political system.

But energy policy, like so many other aspects of government, cannot be fudged forever. When the lights do go out – and that looks more likely than ever – there will be a reckoning. There will have to be.

Modern society cannot function without cheap energy and successive governments which have deliberately sought to increase costs for no good reasons need to be brought to account.
COMMENT THREAD
Posted by Richard at 17:25