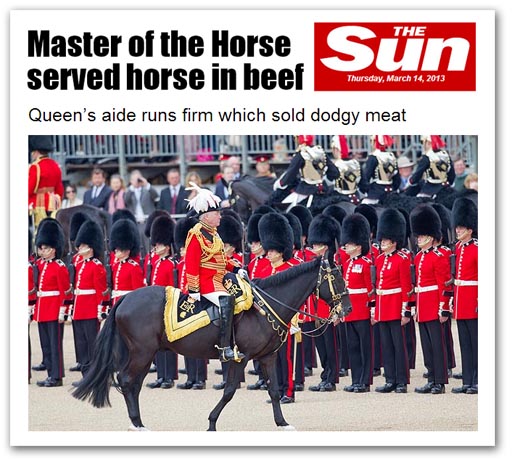 In a typical example of tabloid mischief-making, The Sun today "reveals" that the Queen's Master of the Horse "supplied beef laced with horse meat to one of the UK's biggest catering firms".

This goes back to late February when the caterer Sodexo was reported to have withdrawn products from sale after horsemeat was found in them.

At the time, Sodexo refused to name their supplier, and both the FSA and ministers refused to make the name public, claiming that this could prejudice further investigations of what, on the face of it, were criminal offences.

Last night, however, the supplier was named, which The Sun names as one of the Vestey Foods Group, a privately owned group of thirteen food companies trading all over the world.

Picking on the name, however, allows the tabloid (followed by the rest of the personality-obsessed media) to pick on Lord Vestey (pictured), chairman of the group and former chairman of Cheltenham Racecourse. Since 1999, he has served as the Queen's Master of the Horse - a ceremonial role responsible for the "horses of the sovereign".

The way the story reads, one could almost take it that Lord Vestey personally dropped chunks of horsemeat into the Sodexo order, while, according to The Sun and the dreadful Mary Creagh, "Tory ministers" are engaged in a high level cover-up, "protecting their friends in high places rather than the interests of British consumers".

In fact, the supplier is GA International Food Services Ltd in the Labour heartland of Pontefract, one of the Vestey Group enterprises which moved into the area in 2004 to give jobs to unemployed miners, and their wives, after the collapse of the coal industry in the region.

Lord Vestey would have no more knowledge of the detail of the operation that Mary Creagh herself, or her partner in crime, Labour MP Jon Trickett, in whose constituency the plant is situated. But, given its location, this is obviously clear evidence of a plot to destabilise Tory ministers.

In fact, the clue to what has gone wrong lies in the company's website, where we see that it conforms to BRC Global Standards on food safety – part of the same madness that spawned HACCP and which drives the food safety industry, leading down the cul-de-sac of paper-led certification instead of intelligence-led inspections and traditional enforcement measures. You can tell where their interests lie from the introduction:


The BRC Global Standards are a leading global safety and quality certification programme, used throughout the world by over 17,000 certificated suppliers in 90 countries through a network of over 80 accredited and BRC recognised Certification Bodies. The BRC Global Standards are widely used by suppliers and global retailers. They facilitate standardisation of quality, safety, operational criteria and manufacturers' fulfilment of legal obligations. They also help provide protection to the consumer.

The essence here is standardisation, which stems back to the 70s when supermarkets started employing their own inspectors and setting their own hygiene standards. Suppliers found themselves besieged with rival inspectors, often requiring wildly different and often contradictory standards, so much so that a large plant could be getting two or three inspection a week.

To resolve this problem came the industry bodies such as the BRC to produce their own standards, the name of the game being to reduce the number of inspections to, latterly, to provide evidence of conformity which could be used in any "due dilligence" defence. Note how "protection to the consumer" comes as an afterthought.

From what I know of Vestey Group operations, they always were a cut above the rest, but aggressive in defending their interests against local authority inspections. It would be a brave inspector who took them on, and rare to have your council back you, as the expense of taking a case against a Vestey Group company could be prodigious.

Latterly, the "BRC Global Standards" and similar scheme, have provided the "get out of jail free" cards to the food industry, enabling companies to protect themselves from the risk of food safety and related prosecutions, while providing their supermarket and corporate customers with the paperwork needed for their "constructive ignorance" defences.

It was this ethos which infected the EU at the turn of the century, and led to the current food safety package, brought about by intensive corporate lobbying and ignorance on the part of the legislators.

Throughout this affair, this has been at the heart of the problem, and how nice it would be if the media actually focused on the real issues. I did, in fact, take a phone call from Reuters, taking ninety minutes to explain to a journalist the failings of the regulatory system to a Brussels correspondent. But no story was ever published. The issue is beyond the competence of the media to report.

Strangely, though, at a higher level than the EU, in UNECE, we are beginning to see a glimmer of intelligence. Says Alberto Alemanno. Assessing the EU response to the horsemeat fraud, he sees policymakers selling the EU consumer "the illusion of addressing their concerns while instead relying on the first available policy option that promises a quick fix".

"Creating rules is definitely easier, though more expensive for tax payers, than making sure that they are abided by", he adds, offering a truism that is easy to say but hard to put into practice. Not least, policymakers tend to want panaceas. Devising real solutions is far too difficult for EU politicians and risks upsetting too many powerful people.
COMMENT THREAD
Posted by Richard at 23:35