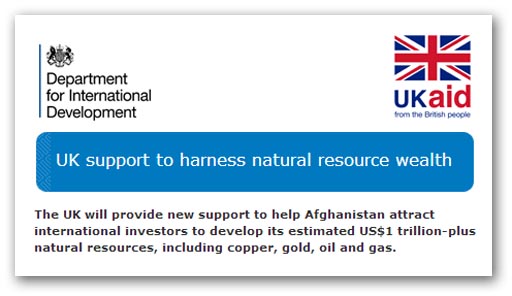 Readers will be delighted to learn that the UK government, under the care of Mr Cameron, last nightannounced a £10 million aid package for the mining industry.

A slight downside to this award is that it is not for the hard-pressed British industry, but for thecorruption-prone Afghanistan Ministry of Mines, whose minister of mines reportedly accepted a bribe of $30 million in exchange for awarding the country's largest development project to a Chinese firm. This was the $3 billion contract to extract copper from the Aynak deposit, considered one of the world's largest unexploited copper deposits.

Last year, however, the project ground to a halt over the deteriorating security situation and the Chinese now need additional financing to restart the work. It is that, to which much of the British finance will be directed, giving the Chinese developers an annual income of close to half a billion dollars, based on current copper prices.

Meanwhile, back in Britain, we celebrate the final closure of one of Britain's last coal mines, with the loss of 650 jobs, brought about by an underground fire which continued to burn ferociously two weeks after it started.


The mine, which was once seen as the future of the industry in the UK but, with its owner UK Coalunable to obtain government support, there is now little option but to close the mine.

On the other hand, Drax power station in Yorkshire is to import millions of tons of wood chippings from the United States, to benefit from renewable subsidies which will double the cost of the electricity produced to the consumer.

Somehow, out of all this, one presumes that Mr Cameron wants us to believe that his coalition government has a coherent industrial and energy policy. But, if he is so determined to wreck our domestic enterprises, and burden us with unnecessary costs, while continuing to support his extravagant aid programme, it is unsurprising that he cannot afford any tax cuts.

But, when he blithely tells us there is "no magic money tree", he should perhaps be listening to himself.
COMMENT THREAD
Posted by Richard at 19:00