One can only marvel at the lead editorial headline in The Sunday Telegraph, telling us that "true Tory policies" are the way to head off UKIP. It leaves us only to ponder whether to succumb to the overwhelming urge to dissolve in insane giggles, or to sink even further into our profound depression.

It was shortly after the elevation of David Cameron to the leadership of what we were to call the "not-the-Conservative-Party" that my then co-editor wrote that some (of us) were feeling "very glum" indeed.

Of David Cameron, she wrote, he expressed "no hard ideas" and seemed "to have few real opinions". Such that he did have tended to be of "the discredited post-war statist, nay, socialist variety". He was also "full of emotional touchy-feeliness", which sat oddly with his Etonian tones and carriage. The trouble is, Helen wrote:

By 29 December 2005, I was writing of "The Strange Death of Politics", illustrating my piece with a cartoon from The Daily Telegraph (below), noting that it said it all about the Conservative Party. And nor were we alone. David Green, then director of the think tank Civitas, was writing a week later ofmissed chances. It was then clear that we were settling down for a prolonged policy vacuum. 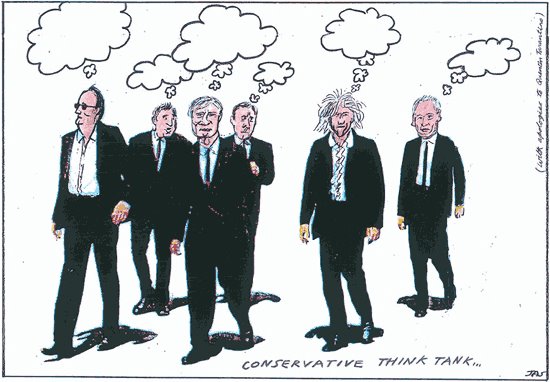 Never being reticent at making our views known, our reward was to be banned from commenting onConservative Home as its then proprietor Tim Montgomerie instigated a rigorous pro-Cameron line that brooked no criticism of their favourite. When that was not enough, Tim removed the link to EU Referendum, and we were cast into out darkness.

Now, more than seven years later, as electoral defeat looms, and UKIP is snapping at the heels of a tired, dispirited Tory party, little Timmy is still banging the drum, having been careful to take out his own personal insurance policy, with a job on the editorial staff of The Times.

All those years ago, Cameron stood at the despatch box jeering at Blair, telling him – to wild applause of his own side, "You were the future once". And now, the Mail on Sunday is openly talking of a new coalition between Labour and the Lib-Dems. That is the future now.

Apart from kicking any chance of an EU referendum into touch, this – we are advised - might just turn out to be the greenest government ever. Just as the paper offers hard proof that "finally shows global warming forecasts that are costing you billions were WRONG all along", we face "more subsidies for renewable energies and wind farms, tough decarbonisation targets and perhaps the reining in of plans to expand gas power production and shale gas development".

That, if nothing else, will be Tim Montgomerie's legacy, and while the Telegraph can glibly write about Nigel Farage, UKIP's "smiling assassin", the true assassin of the Tory Party has been David Cameron, aided and abetted by his vacuous "modernisers" and their fellow-travellers.

The sad thing about all this is that we saw it all coming way back in 2005, and only now are bubble-dwellers – as Cameron faces his inevitable defeat – beginning to realise that the Tory Party is on a countdown to oblivion.

The Mail on Sunday suggests that we may look back at this weekend as the moment that marked the start of the first national coalition between Labour and the Liberal Democrats for close to a century. That is as may be, but another milestone was on 6 December 2005, when David Cameron won the leadership of the Conservative Party.
COMMENT THREAD
Posted by Richard at 23:26