EU Regulation: a glimpse of UNECE 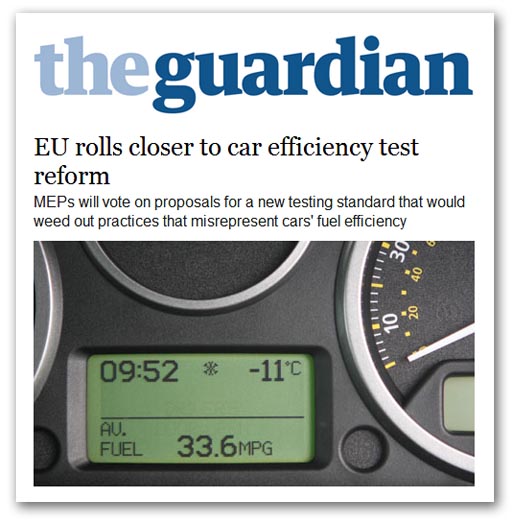 An intriguing article in the loss-making Guardian tells us that "MEPs will vote on proposals for a new testing standard that would weed out practices that misrepresent cars' fuel efficiency".

The story is so utterly, bizarrely wrong that it took me quite a while to track down the actual facts, and this the newspaper illustrates once again the slender understanding British journalists have of European Parliament procedures. But, in this case, it also lifts the lid on the alternative world of ours, giving us a glimpse of that part of world government managed by UNECE.

The Guardian story starts by picking up a story run last week by the paper, which tells us that car manufacturers are manipulating fuel efficiency tests. A campaign group, we were then told, was complaining that carmakers exploit loopholes in EU law to achieve favourable but unrealistic miles/gallon results.

Obviously wanting to report developments, the paper now tells us that "the EU has taken a step towards reforming [these] vehicle tests", with "a vote on reforms to the system in an influential committee of MEPs on Tuesday".

Cited in this respect is Lib-Dem MEP Fiona Hall and that gives us the clue to what is going on. She is rapporteur for an opinion delivered by the Committee on Industry, Research and Energy for the Environment Committee, "on the proposal for a regulation amending Regulation (EC) No 443/2009 to define the modalities for reaching the 2020 target to reduce CO2 emissions from new passenger cars".

What's this got to do with proposals for a new testing standard, you might ask, and the answer would be "not a lot". The proposed regulation is not about testing standards, and the responsible committee is not Hall's industry committee, but the environment committee.

However, what Hall does in her "opinion" is point out that there is "the growing gap between type-approval and real-world emissions from new passenger cars", which is "largely due to the methods which car manufacturers use when measuring CO2 emissions according to the current test cycle procedure".

She therefore, adds, "It is vital to address this discrepancy, not least because CO2 reductions directly translate into fuel savings for consumers and lower oil imports", and then states that she would "like the Commission to review, by 2014, the EU's regulatory test procedure for measurement of specific CO2 emissions established under Regulation (EC) No 715/2007 and its implementing measures".

So, we have a proposal for a regulation which is not about vehicle testing, which is being handled by the environment committee of the European Parliament. In response to this a member of another committee offers an opinion on the regulation, expressing a wish for the Commission to review the regulatory test procedure.

The opinion was voted on by the industry committee yesterday and this, according to The Guardian, is interpreted as: "the EU has taken a step towards reforming [these] vehicle tests", with "a vote on reforms to the system in an influential committee of MEPs on Tuesday".

Facile this claim may be, the paper then goes to report that the Commission "plans to follow the new ínternational procedures which are currently being negotiated by the informal United Nations Economic Commission for Europe (UNECE) working group on worldwide harmonised light vehicles test procedure (WLTP) in Geneva".

These negotiations, we are told, are expected to conclude by 2014, but Hall want the Commission to update the EU test cycle by January 2015, regardless of whether or not the new UNECE test is finalised.

Here, then, is an acknowledgement that UNECE is actually making rules which the EU is following, about which we reported in detail last January. Needless to say, though, the Guardian hasn't got it right, because it talks about an informal UNECE working group, with Hall thinking that the Commission can by-pass this procedure and act unilaterally.

Thus – not unusually – we have an MEP as well who doesn't know the procedure. UNECE is managing harmonisation on a global scale, these current negotiations involving the EU, Japan and India, working alongside the United States EPA.

The procedure is very far from being informal. UNECE is calling the shots and the procedure cannot be by-passed. In the fullness of time - sometime around 2015 - its test will be implemented by the EU.

But you will never learn of this from the Guardian, although at least it does now know of the existence of this higher regulatory body.
COMMENT THREAD
Posted by Richard at 23:41