Eurocrash: a contribution to financial stability 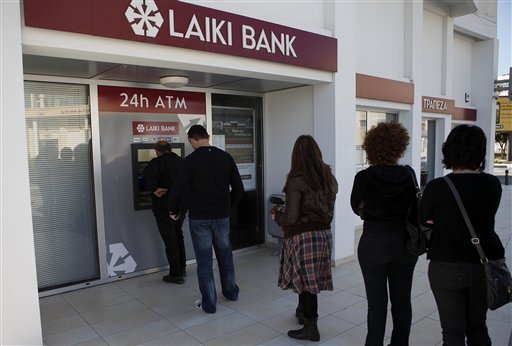 I cannot begin to pretend to understand what the "colleagues" think they are doing, with their €10 billion "bailout" of the Cyprus banks. But with a deposit levy - set at 9.9 percent on bank deposits exceeding €100,000 and at 6.7 percent on anything below that, it is being described as "pure theft".

The levy is intended to raise around €5.8 billion and will take force on Tuesday after a bank holiday on Monday. This has precipitated queues at the "hole in wall" cash dispensers machines, as people have sought to remove their money before the levy is extracted.

The Cypriot government, however, has got there first. Bank customers are only permitted to withdraw the balance of their deposits, less the amount of the levy. Meanwhile, a block has been put on the electronic transfer of funds, stopping people moving money out of the country.

Almost half of the depositors, though, are believed to be non-resident Russians, which means those that did not pre-empt the action have been caught by the freeze. Cypriot Finance Minister Michael Sarris, who negotiated the package during ten hours of late-night talks in Brussels, will not be popular with his offshore investors.

However, it is being said that, without a rescue, Cyprus would most certainly default, threatening another crisis in the eurozone to add to all the other crises they have to deal with.

That has not mollified the unhappy citizens of Cyprus. In the coastal town of Larnaca, Andy Georgiou, 54, speaks for them all. "I'm extremely angry", he says. "I worked years and years to get it together and now I am losing it on the say-so of the Dutch and the Germans". He is a British-Cypriot who returned to Cyprus in mid-2012 with his savings.

An unnamed pensioner was a little more direct. "They call Sicily the island of the mafia. It's not Sicily, it's Cyprus. This is theft, pure and simple", he says.

But you just have to love Dutch Finance Minister Jeroen Dijsselbloem, who says that, without the levy, it would have been impossible to save Cyprus' financial sector "We are not penalising Cyprus ...,we are dealing with the problems in Cyprus", he says.

Stealing money from pensioners, it seems, is "a contribution to the financial stability of Cyprus". You know it makes sense – and they've been doing it here for years.
COMMENT THREAD
Posted by Richard at 23:12