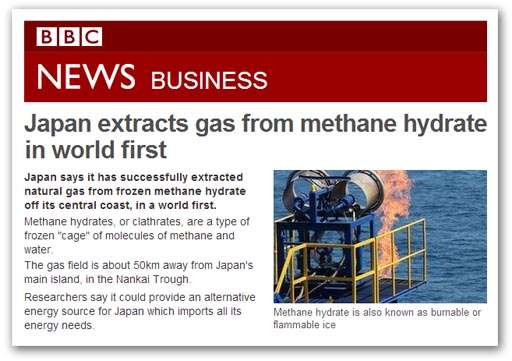 In what must been seen as a major setback for the greens, the Japanese have said that they have successfully extracted natural gas from frozen methane hydrate off the central coast of Japan - a world first.

Methane hydrates, or clathrates, we are told, are a type of frozen "cage" of molecules of methane and water. The gas field in question is about 30 miles away from Japan's main island, in the Nankai Trough, extracted from about 1,000 feet below the seabed.

Researchers say it could provide an alternative energy source for Japan which imports all its energy needs, and the estimated deposits in the Trough amount to at least 40 trillion cubic feet, sufficient for a decade or more of Japan's gas consumption. Total reserves may be sufficient to supply Japan for a century.

Globally, by some estimates, the energy locked up in methane hydrate deposits is more than twice the global reserves of all conventional gas, oil, and coal deposits combined. Other countries including Canada, the US and China have been looking into ways of exploiting the deposits and are also reporting promising results.

The Japanese aim is to establish methane hydrate production technologies for practical use within five years, following which substantial quantities will doubtless be extracted.

Any exploitation is bound to have a global impact as, since the backlash against the nuclear industry after the Fukushima disaster two years ago, Japan has become a major player on the global gas market, driving up prices of internationally traded gas.

A major new source of Japanese gas, therefore, is bound to have an effect on relieving the pressure on gas prices – even in the UK – making this fossil fuel more attractive, until the carbon tax wipes out its cost advantage.

This notwithstanding, a substantial addition to global reserves from this unconventional source further weakens claims that there is a global energy shortage. Success by other countries, and exploitation of what will then be proven energy reserves, will remove energy shortage from the political agenda, with interesting knock-on effects.
COMMENT THREAD
Posted by Richard at 22:57