Media: cleaping up its act 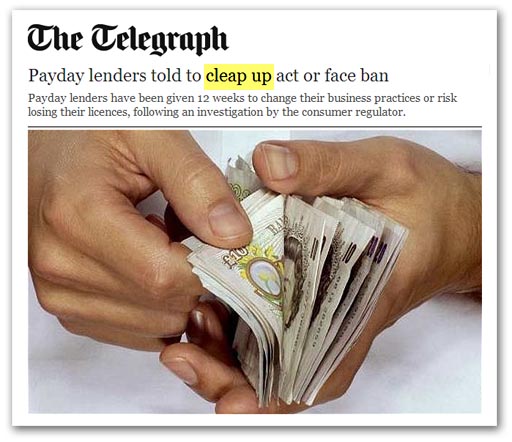 Jessica Winch of The Telegraph tells us that payday lenders have been told to "cleap up" their act. The same might be said of a newspaper that is downsizing its editorial staff and, in the interests of "economy", cutting down the number of sub-editors it employs.

But, like the payday lenders, the Telegraph is only interesting in taking your money for minimum input. It certainly isn't about giving us accurate news.

If you are tired with following the media agenda, though, just ignore it. That's what Bill Whittle says. It gets interesting about 45 minutes in, and those who have been following the ideas here will recognise elements of the Harrogate Agenda. He talks about the "Common Sense Resistance" – the thinking is muddled, but he's getting there.
COMMENT THREAD
Posted by Richard at 21:38