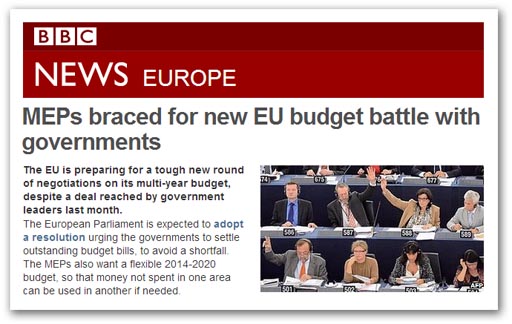 The EU budget was up for debate in the European Parliament today, and then for a vote. Yet, despite the importance of this issue, which was pitching the parliament against the member states heads of government – who believe they already have a deal - only the BBC andEuractiv offered reports, neither of which gave a clear – or comprehensive – picture of what was going on.

This is all the more puzzling as Die Welt signalled story weather ahead last week, which we reported on the day – almost the only English-language report on the net.

Current reports focus an a Motion for a Resolution drafted by the leaders of the main political groups in the parliament.

This is a potentially explosive document as it asserts that the European Council's conclusions on the MFF (Multiannual Financial Framework), is "no more than a political agreement between Heads of State and Government", and "rejects this agreement in its current form, as it does not reflect the priorities and concerns expressed by Parliament".

Euractiv, in its detailed report, suggested that there was strong pressure from national delegations to water down this wording. We were told that amendments tabled would remove the word "reject" and the proposed revisions would be voted upon in this week's session in Strasbourg.

The debate was held this morning, without the final text of the resolution being listed on the agenda, with a counter-motion proposed by Richard Ashworth on behalf of the ECR Group. The vote was scheduled for the midday session.

However, even if this resolution falls – which it well might – the battle is far from over. Procedurally, the Parliament is still required to come to an agreement with the Council on the detail of MFF. Formal negotiations are set to start in April with a target for an agreement by the summer.

Meanwhile, the procedure for agreeing the annual budget for 2014 is going ahead, on which there was a debate yesterday, on a separate motion. On this, a formal proposal is expected from the Commission in April, although without an agreement on the MFF, it is not clear how the budget will be framed.

All of this makes the position as clear as mud, so one can quite understand the media walking away from the complications, and going for the easy option of reporting on possible changes to the euro elections. After all, the EU comes under foreign news, and people aren't interested in what goes on in foreign parts, especially when there is so much important domestic news to absorb.

UPDATE: The EP appears to have adopted the resolution rejecting the budget, and Schultz is now saying that the parliament will not accept the budget until all payments for 2012 have been made and there are agreements in place on future funding and a comprehensive revision.

On the face of it, this does drive a cart and horse through Mr Cameron's budget "victory", effectively reversing the 3.3 percent headline budget cut. The precise details remain to be established, but it could mean that the Member States have to find as much as €217 billion more, to cover existing commitments.

However, since the details remain obscure - for the moment - this is a slow-burn defeat for Mr Cameron and the other EU leaders. The extent of what could amount to a humiliating reversal will only emerge gradually, as the negotiations progress. As it stands, though, the MEPs will be chalking this up as a victory.
COMMENT THREAD
Posted by Richard at 22:59