Climate change: the winter of our discontent 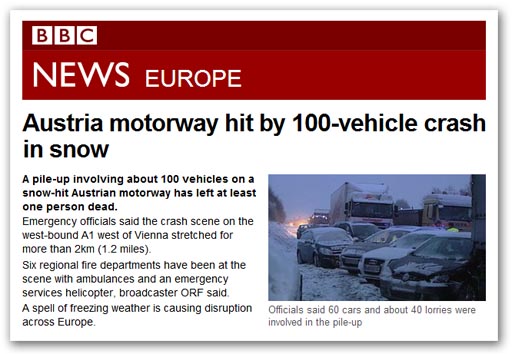 Readers will recall the tragic helicopter accident during a police exercise in Berlin last week during a heavy snowstorm, and also the pile-up in the snow on the A45 in Hesse, near Münzenberg, a fortnight ago.

Now, courtesy of the BBC, we learn of another pile-up involving on the continent, this one on an Austrian motorway, involving 100 vehicles, leaving at least one person dead.

In passing, the state broadcaster also tells us that there is a spell of freezing weather is causing disruption across Europe, adding that an icy carriageway was a likely factor in this crash.

And this was not the only major incident. In southern Austria, at least 29 people were injured - six seriously - in two accidents inside road tunnels. The A2 motorway, which runs through the tunnels, was blocked in both directions.

Further east, there has been record-breaking snowfall in the Ukrainian capital Kiev has caused traffic chaos, which has seen many residents taking to skis instead. Minsk has also been badly hit, and three regions of Romania heavy snow has blanketing three regions, closing schools and disrupted road traffic.

The freezing weather, we are also told, has also caused chaos on Serbia's northern border with Hungary where lorries queued for hours amid heavy snowfall. Black ice coating roads in neighbouring Croatia has caused a spate of accidents.

Then, thousands of people in Hungary found themselves trapped in heavy snow after a sudden cold snap and high winds swept over Eastern Europe. Budapest has deployed tanks to reach motorists trapped by the conditions.

The heavy dump has trapped people in cars, buses and trains as dozens of major roads across the country were blocked by the snowfall.

And it isn't just that. In Germany, it is estimated that long, cold, dark winter could cost up to €6 billion in extra healthcare and lost productivity as people stay away from work sick, as well as causing terrible confusion to the humourless German police.

So long and so often have we been hearing the laments from the warmists about the perils of warning that it is about time that they stopped and gave some real though to the far greater dangers and disruption arising from cold weather, and the economic cost.

Even then, there are the hard-line warmists who believe that this spell of bad weather is directly the result of "climate change", not able to deal with the reality of a cooling planet.

Their obsession is diverting massive resources from the real problem, so much so that even at local level, English councils spending hundreds of thousands on the salaries of climate change officers cannot afford to clear the snow from the streets.

When finally, sense prevails – as indeed it must – we shall, in our winter of discontent, remember these people. The evil that men do should not live after them. We cannot afford it.
COMMENT THREAD
Posted by Richard at 17:24