UK politics: the dishonesty of the "Left" 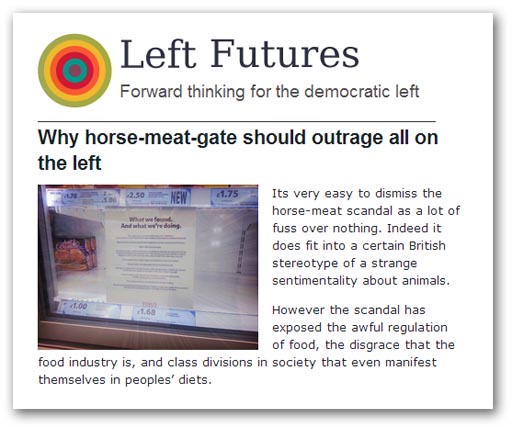 One of the reasons for blogging is the altruistic desire to spread knowledge. Strange though it may be, I have an old-fashioned sense that one should share information when one is blessed with it, for the betterment of mankind as a whole.

And when it came to the recent horsemeat issue, this was something where I could certainly contribute, having been in the food safety business for thirty years, with a comprehensive overview of food legislation and safety systems.

The sadness is that while you can offer knowledge and insight, there is no way one can – or should - force it on others. But it remains troubling that so many seem to revel in their own ignorance, and make no attempt whatsoever to remedy it. One can take a horse to water, as I am prone to say, but you cannot make it think.

When it comes to cultivating ignorance, though, none seem to cultivate their ignorance more assiduously than the so-called "Left", as in this very recent example by Left Futures, its dissertation faithfully reflecting the views of the Labour front bench.

The horse-meat "scandal" it thus tells us, "has exposed the awful regulation of food, the disgrace that the food industry is, and class divisions in society that even manifest themselves in peoples' diets".

That then is the mantra and, to illustrate the first point, we are referred to the "Any Questions" programme a few weeks ago when Nigella Lawson said she did not know what the fuss was about. She had eaten horse plenty of times in restaurants.

This, apparently, had evoked a response from Helena Kennedy, who had been "quick to point out Lawson’s privileged position", saying "the horse she'd eaten hadn't come from the knackers yard and not been properly regulated like the horse found in this scandal".

Now, if one recalls the early phase of the publicity on this issue, where Findus was in the frame, the source of the horsemeat was tracked to a slaughterhouse in Romania. And there, no one suggested that the slaughter had not been unregulated in what was a fully approved EU-standard slaughterhouse.

In fact, if you want to eat rotten meat, the place to have been might have been the branded 220-strong French restaurant chain Flunch, which was last year caught up in a rotten meat scandal, where the Castel Meat Group had been implicated in "repackaging" spoiled meat and sending it on to its restaurant group customers.

The scandal emerged after a "Peter H", former quality director, had discovered that employees of the company had been selling lots of spoiled meat. He had ordered the meat destroyed but had found that, behind his back, they had continued selling it. When Peter H had challenged the practices, he had been fired, the complaining at the end of 2012 to the veterinary services.

Ironically, as with so many others, Castel Meats claims to have ISO 9000 certification and HACCP plans, the latter being a statutory requirement under EU law. But surely, this must be an example of "poor regulation" about which Left Futures complains, for it is exactly the same legal framework under which horsemeat has been sold as beef.

Interestingly, Left Futures - which exhibits strong europhile tendencies – does not identify the source of its "awful regulation of food", and nor does it suggest where improvements might lie, other than to say: "We have to have proper food regulations to make sure that companies cannot exploit the less well off with sub-standard products".

To support these claims for the less well off, we are earnestly told that the horse DNA "has all been found in cheap meant that many people who are less well off have to buy", something which simply is not true. Not only do we have Davigel, the high-end French catering supplier, there have also been several kebab suppliers, and we have also seen adulterated corned beef.

In fact, the very latest findings from Berlin involved two doner kebabs, corned beef, a fresh meat product and one ready meal. The adulteration is by no means confined to foods eaten by the less well-off. This is a widespread international fraud, involving multiple actors in many nations.

Only by complete disregard of the evidence, therefore, could Left Futures assert that we "should make no mistake". The horse-meant scandal, it tells us, "has class at its core". Its about "the rights of all people, whatever their means, to be able to have the dignity to have decent food".

Now add another lefty mantra – the "cuts". The adulteration of beef with horse-meat "was driven on as a race to the bottom for ever cheaper meat by local authorities. With non-essential budgets being cut from hospitals and schools, procurement departments were handing food contracts to the cheapest bidder".

That, it is then asserted, "made companies look outside the law to get cheaper meat and ended up with unregulated horse in our food-chain".

The libel there is, of course, non-specific, but the inference is that companies producing the end products knowingly broke the law. No allowance is made for the probability that some of those companies were themselves victims of this massive epidemic of fraud, and the flawed regulatory system on which they were unwise enough to rely.

In the simple world of the lefties though, there are no greys. It is all black and white. "Ultimately, they advise us, "the scandal has exposed all the problems in the modern food industry".

What those problems are, we are none the wiser. And we are not left to dwell on the issue. The real message is - poor regulation aside - that "there is a clear class division in terms of diet, with those less well off being forced to eat poor quality food that leads to ill health".

Then, sneaked in at the final furlong is the real message: "Government cuts to services" have resulted "in sub-standard food making it onto the plates of schoolchildren and patients". There you go – you knew it was that all along. Like the europhiles, with their "more Europe" as the answer to every problem, the cause of every problem for the lefties is "government cuts".

We don't need inquiries; we don't need knowledge. The answer was there all along. All we needed to do was to read Left Futures.
COMMENT THREAD
Posted by Richard at 00:00