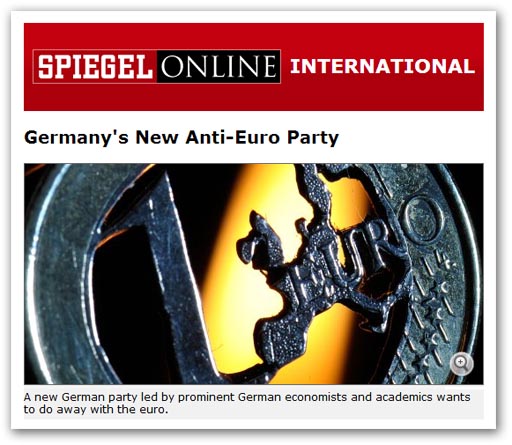 "Democracy is eroding," reads a statement on its website (in German). "The will of the people regarding (decisions relating to the euro) is never queried and is not represented in parliament.

The government is depriving voters of a voice through disinformation, is pressuring constitutional organs, like parliament and the Constitutional Court, and is making far-reaching decisions in committees that have no democratic legitimacy".

Thus does Spiegel tell us of a anti-euro party in Germany, its founders a collection of some of the country's top economists and academics.

Named Alternative für Deutschland (Alternative for Germany), the group has a clear goal: "the dissolution of the euro in favour of national currencies or smaller currency unions". The party also demands an end to aid payments and the dismantling of the European Stability Mechanism bailout fund.

And it also demands referendums on fundamental social issues. "Blatant bad decisions by our elected officials", it says. "need to be corrected. This especially applies to the assignment of important powers to the EU".

The party has yet to produce a party manifesto but its "impressive" list of prominent supporters includes a large number of conservative and economically liberal university professors.

The most notable name on the list is Hans-Olaf Henkel, the former president of the Federation of German Industries, but it also includes such economists as Joachim Starbatty and Wilhelm Hankel, who were part of the group that challenged Greek bailout aid at Germany's Constitutional Court.

The main founder, Bernd Lucke, a professor of macro-economics from Hamburg, was a member of Chancellor Angela Merkel's Christian Democrats for 33 years before leaving the party in 2011 as a result of euro bailout efforts. "The current, so-called rescue policies are exclusively focused on short-term interests, primarily those of the banks," he says.

Nevertheless, it is not yet certain that the party will be able to collect the requisite number of signatures in time to be included on the ballot in general elections this autumn - a minimum of 2,000 in each of Germany's 16 states or 0.1 percent of each state's population, whichever is lower. "We will make that decision based on the support we receive," Lucke adds. "But we have been overwhelmed by the public's reaction thus far".

Even if the party does get on the ballot, it remains unclear whether it will attract significant support, says Spiegel. So far, it remains a single-issue party - and even on that single issue there is a lack of clear consensus on exactly how to proceed.

There is a feeling though that, with concern in Germany growing that the country has become the de-facto paymaster for the rest of the euro zone, Alternative for Germany could attract a fair number of protest votes from frustrated conservatives.

But, most likely, the party's success will depend on the state of the euro at the time of the election. Should the crisis flare up, so too could anti-euro sentiment. If it does, concludes Spiegel, that sentiment in Germany now has a political home. COMMENT THREAD
Posted by Richard at 11:55