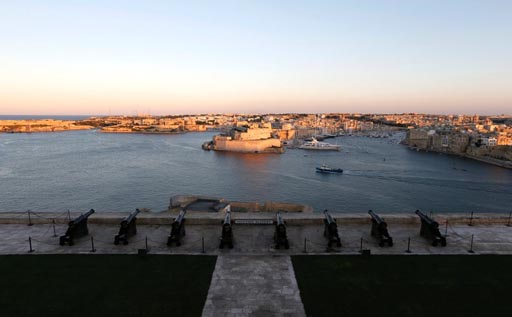 Gradually, more details are emerging on the background to the Cyprus bailout. Handelsblatt isn't the first or the only one, but it is offering one of the clearest reports, alleging that large amounts of money were withdrawn from Cyprus just before the shutters came down.

Amongst the accounts cleaned out, it seems, were those of senior officials from the Cypriot banks and the government, and the suspicion is that they have been transferred to another EU country.

The Cyprus Parliament President Giannakis Omirou is examining the suspicion that unusually high remittances were made abroad, with greater cash withdrawals than there should have been.

Omirou has requested a list of the transfers in recent weeks and is also examining the government in Nicosia to see whether large sums were transferred abroad as the banks closed and the online banking was locked down.

The extent of the capital outflow has been so huge that the Cypriot banks need far more money than just the money customers had withdrawn from ATMs.

Süddeutsche relays a suggestion that there were up to ten billion euros deposited by Russian citizens. Other estimates put the sum at double and more, but it is difficult to determine precisely how much, as so many of the origin of many deposits are concealed in shell companies.

Top of the list of destination countries is Malta (pictured) and it is now known that Cypriot law firms were recommending to their foreign customers with companies in Cyprus to maintain accounts in Malta. This trend increased dramatically after the first speculation about the involvement of savings in the bank bailout.

Furthermore, an international law firms based in Texas sent targeted e-mails to Cypriot companies, telling them: "Malta has a strong financial sector, a good growth rate and low government debt".

Apparently, firms in the Isle of Man and Latvia are also taking in refugee funds from Cyprus and there are also reports that there has been a substantial inflow of funds from diverse sources into Jersey.

Back in Cyprus, a massive convoy brought five billion euros in cash in from Larnaca Airport to the Central Bank in Nicosia after it has been shipped in, preparatory to the banks reopening today. The news is that withdrawals are to be limited to €300 a day, with transfers abroad capped at €5,000 a month.

If the bird has already flown, though, it maybe that the crisis is by no means over, as there may be insufficient in the banks to deliver the sort of cash the "colleagues" are expecting. And then there is the little matter of Luxembourg, which may also be in line for some corrective action.

Meanwhile, with Cypriot riot police standing by to keep order, anti-German sentiment is growing, leaving Germany to complain that the "colleagues" are not defending it against unfair criticism. 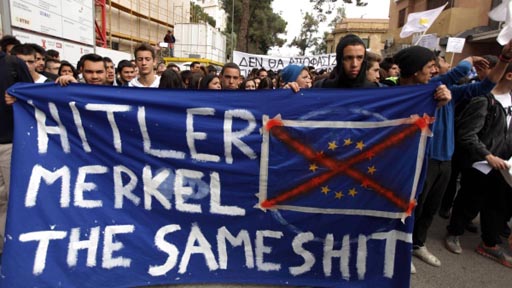 Solidarity is required, FAZ concedes, but just because the German government insists on a return, it is pilloried. One can only wonder at Mrs Merkel's composure in the face of the insults she has had to put up with, the paper says. Comments are often "negative and rude".

Germany, it says, is living the Thatcher experience. European governments used to hide behind the British prime minister, because they dare not say the things she said openly. Now the federal government is being blamed for a policy that is in line with other EU partners.

So, says Handelsblatt, "keep calm and look forward to Easter", when the markets close for the holidays. Sounds like a plan … better than most.
COMMENT THREAD
Posted by Richard at 12:07