Booker: look at the graph 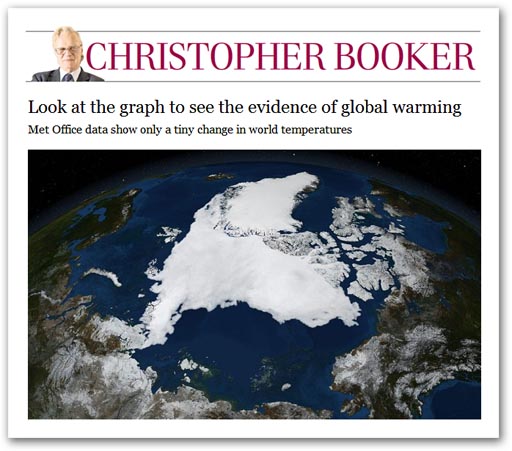 It was Booker who pointed me to the graph in the Financial Post which went on the blog earlier this week. Now Booker has reproduced it on his column - without a comment facility for the second week as the back office staff manage completely to screw up the website.

Nevertheless, the graph speaks for itself. By including the huge part of the data usually left out, we see that the line looks virtually flat. The actual changes look relatively so small, compared with those rises and falls of several whole degrees the world survived in the past, that any idea that we are facing catastrophic warming pales into insignificance.

In recent months, says Booker, even such fanatical proponents of the warmist orthodoxy as Rajendra Pachauri, chairman of the UN's Intergovernmental Panel on Climate Change, James Hansen of Nasa, and the Met Office have all had to concede that since 1997, the warming trend has stalled virtually to a standstill.

Of course, there was a modest temperature rise in the 20th century, as a continuation of the warming that began 200 years ago as the world naturally emerged from those centuries of cooling known as the Little Ice Age. But the 0.5C rise between 1976 and 1998 was no greater than the 0.5C rise between 1910 and 1940 (with 35 years of cooling between them, so that the net rise in the past century has been only 0.8C).

Yet it was on that modest rise in the 1980s and 1990s that the whole of the greatest and most expensive scare in history was launched on its way, with all the terrifying political and economic consequences we see around us today.

The very last people to recognise this, alas, will be our politicians, concludes Booker. They seem incapable of looking properly at the evidence. But the price we are all increasingly having to pay for their gullibility is incalculable.
COMMENT THREAD
Posted by Richard at 23:29