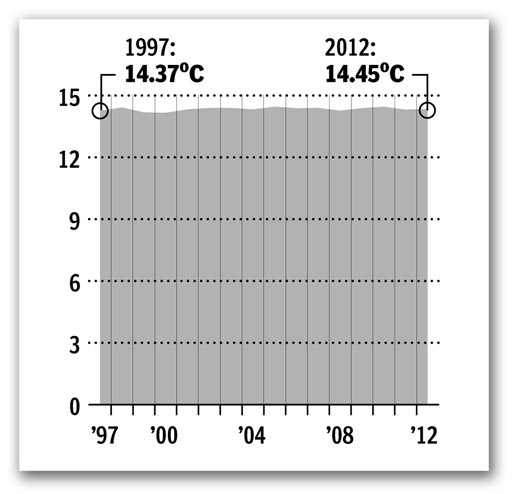 Lawrence Solomon in a recent post charted the "rise and rise" of global warming over the past fifteen years. Based on UK Met Office data, the graphic above shows the global temperatures in degrees Celsius.

And if you think the flatlining represents proof that global warning has stopped, you are very silly people. Those clever scientists at the University of Colorado Boulder have found that the real reason is volcanic eruptions releasing tons of sulphur dioxide into the atmosphere.

So there you are – we still have global warming, but it is being temporarily suppressed by a volcano-induced increase in the "optical thickness" of the stratospheric aerosol layer. This allowed less sunlight to reach the surface, and therefore lowered the temperature.

The only problem is that, it there is global warming, but it isn't showing, that surely means that there can be no detectable effects from the non-existent global warming. And if that is the case, how come all that "extreme weather" is being blamed on global warming?

After all, if the temperature isn't going up, there can't actually be any temperature-induced weather effects, in which case this "extreme weather" can't be attributable to global warming. Or is that too simple for us mere mortals to understand?