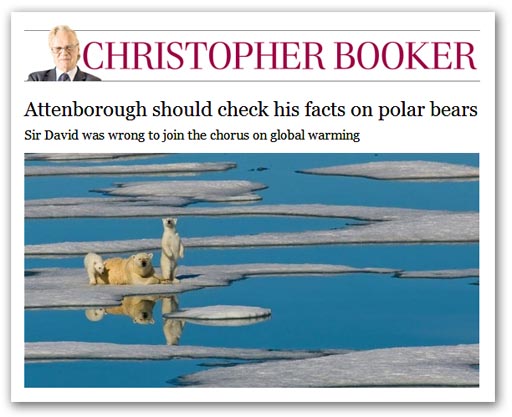 Add a tilt at St David the Attenborough, the BBC, Greenpeace, Friends of the Earth, WWF and Al Gore, light blue touch paper and retire to a safe distance. Then watch the fun on the comments threat, as the warmists come storming out of their burrows, spitting and snarling with fury.

Pity the poor dears that their holy icon, the polar bear, is alive and well in the Arctic, the population currently greater in extent than at any time in 30 years. But such a vital part of the anthropogenic warming myths is the symbolism of polar bears under threat that the warmists can't afford to ignore the challenge.

So we develop a new sport to cheer up the dull Sundays at the fag-end or a long, cold winter … warmist-baiting. There should be an award for it. Booker would win it every year.