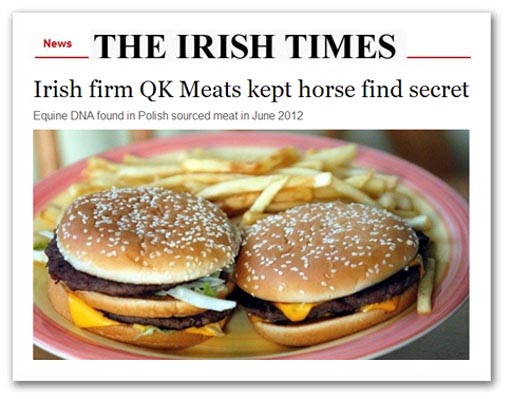 Briefly mentioned in part 1, the real villains of this continuing drama are not so much Silvercrest, as QK Meats – now spread all over the Irish press, not least in the Irish Times. This keeper of secrets is a subsidiary of the Queally Group, a group with a current value in excess of €1.5 billion which claims to be one of Ireland's largest privately owned Agri-businesses. Look for the Queally Group on the web, however, and you will come up with this website, which advertises its flagship company, Dawn Meats. Of QK Meats, you will find no official company presence. Its website address is qkmeats.com, but this has evidently been taken down, for good reason. All we get is, "Error: The Query produced no records".Thanks to the cleverness of the Wayback Machine though, we can see the website in all its former glory (pictured below - click to enlarge), noting that the company has supplied meat products to over 40 countries world-wide since 1991. 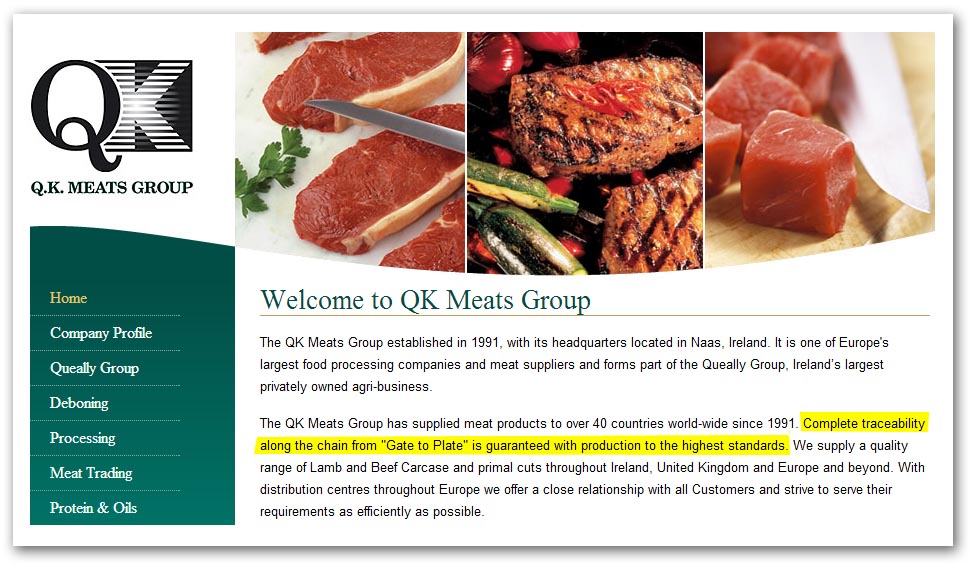 Ironically, it claims that, "Complete traceability along the chain from 'Gate to Plate' is guaranteed with production to the highest standards". And a separate page on food safety tells us:

To enable both QK and its customers to serve the market at the highest levels we have achieved accreditation's such as higher level EFSIS, British Retail Consortium (BRC) membership of the Bord Bia quality assurance scheme, triple hygiene award from Excellence Ireland and a fully implemented HACCP system.

The irony starts to become apparent when the company was recently implicated in the supply of meat to Frigilunch which in turn had supplied Birds Eye with a number of products. 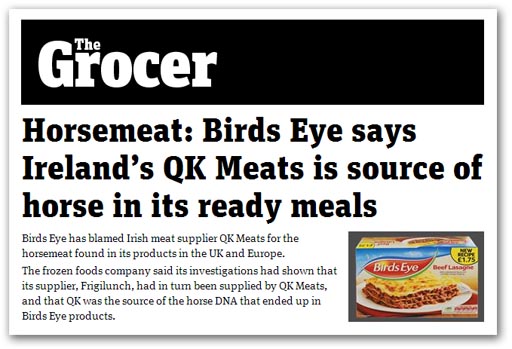 Birds Eye said it believed QK Meats was the source of horse DNA in both UK products and the chilli con carne from Belgium. That was on 5 March, but we now find from the Irish report that QK Meats had been involved much, much earlier.

Details in fact started to emerge after the Irish Department of Agriculture had found horsemeat at Silvercrest. It had then conducted further enquiries to establish whether Polish labelled product had been used in other meat processing plants in Ireland. This led to QK Meats informing the Department on 5 February last that it had imported consignments of Polish labelled beef trimmings. Some of these had tested positive for equine DNA.

The company then told the Department that products had been sourced from some 19 different Polish suppliers over a sustained period and these stocks had been stored in QK Cold Stores, in Naas, Co. Kildare. QK Meats subsequently admitted that, based on its own "risk assessment", it had tested 15 consignments from nine of its 19 different Polish suppliers. Seven of these had been positive for equine DNA.

What has shocked an outraged both the Department and the media in general, though, is that the first positive test result was on 27 June 2012. Yet, instead of warning the Department, the company kept the information secret, simply contacting the Polish supplier whose representative visited the plant and arranged to take back the consignment.

And this had by no means been the end of it. Further positive tests results on other consignments of Polish labelled product were obtained by the company in October, November, December 2012 and January 2013. QK Meats claimed that none of the equine positive raw material entered the food chain, but nevertheless continued to source raw material from Poland while being aware of its suspect nature.

Another damning fact is that QK Meats was buying the Polish-labelled beef at €400 per ton less than the price of corresponding beef trimmings available in Ireland, making it clear that price had been the primary motivator in utilising imported ingredients in the manufacturing process.

Still it goes on. Despite having found some products positive for horsemeat, the company did not test other consignments. Some of these were used in the manufacture of frozen minced meat preparations at a rate of between 10 and 40 percent, for a range of customers in six countries.

Other than suggesting that there were "mumblings" in the trade about suspect Polish raw material, QK Meats did not explain fully why it was testing for equine DNA since last June or why, having found equine DNA in some products did not test all such products.

Thus, says the official report, while these findings are extremely disturbing, QK Meats, knowing that the State was involved in a full public investigation into the source of equine contamination during the latter part of January, failed to inform the Department of its earlier findings following positive DNA test results.

These facts, it says, would have informed the official investigation in a significant way and, most likely would have led to earlier conclusions on the source of equine DNA. Failure on their part to act at a much earlier time was inexcusable.

It then adds that the this failure on the part of QK Meats senior management showed scant regard for the public good and was a serious failure of judgement on its part in not revealing to the official authorities. The information could have shortened the initial phase of the investigation in identifying the likely source of the equine DNA.

But hey! The company can't be that bad. It has all its certifications and accreditation, it conforms with BRC Global Standards, it has a triple hygiene award from Excellence Ireland and it has a fully implemented HACCP system. All the bells and whistles were there. How could there possibly be a problem?