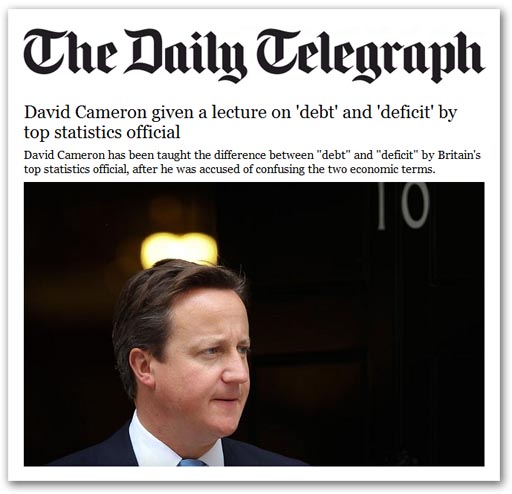 We (or, at least, I) tended to think Mr Cameron was being deliberately untruthful (aka lying) when he so often claimed that government debt was going down. It never occurred to me that he really didn't understand the difference between debt, as in national debt, and deficit. He couldn't be that ignorant, could he?
Well, it seems I owe Mr Cameron an apology. He hasn't been lying. He really is that ignorant, across a wide range of subjects. And, when you realise who writes his speeches, the (poor) quality of what he delivers should come as no surprise. But then, bad politicians hire bad advisors, and cut themselves off from corrective sources. That is one of the reasons why Cameron makes so many mistakes, and will continue to make them. COMMENT THREAD
Posted by Richard at 12:09