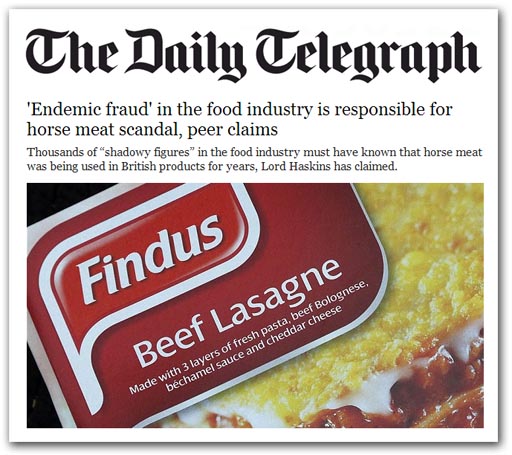 As former chairman of Northern Foods – one of the biggest suppliers of processed foods to the retail trade – Haskins does know a thing or two about the system. Thus, when he says there is endemic fraud in the industry, he is most certainly in a position to know.Since this is no more than we have been saying, in recent posts, we could not disagree with his observations. "You can't get away from the odd cheat or the odd failure, but this is so widespread, it's endemic, it's institutional fraud right across the piece", says the noble Lord. "Thousands of people must be aware of what’s going on". And, of course, that is precisely the point. Thousands of people are aware and have been aware that the system itself is a fraud.Actually, although this is headed up by the Telegraph, it comes from the BBC Radio 4 Today Prograame (07:51 am). The chain is far more complicated than it should be, says Haskins, talking of the "shadowy guys" in the trade.

Then, for me, comes the second bombshell. "There's a huge amount of form-filling going on by the way", he says, "everybody fills in forms to say they are doing the right thing but they don't actually go and look at the factory to see what is happening inside the factory".

The Telegraph however, doesn't understand the significance of this assertion and doesn't print it. And neither does the Today Programme follow through. Yet this is the crux of the whole problem. The entire food control relies on paper (the HACCP regime) and real-life checks have been removed from the process.

Ironically, Haskins is a life-long europhile, so he omits to tell us that this is an EU-mandated system which has effectively wrecked the traditional basis of food control.  His darling EU is at the heart of the problem, so he can't bring himself to say so.

About this, I spoke to a senior consultant in the food industry this morning. He told me that the effect of the system is to "hammer the good guys" while the crooks easily find their way around it. This is the classic sledgehammer to miss the nut.

Thus we have Owen Paterson today reiterating that this "is a case of fraud and a conspiracy against the public, this is a criminal action, substituting one material for another".

The longer-term problem though is that the EU system of food control is not capable of detecting fraud. It is based on the assumption that the operators are honest, and access to the food network can be controlled. The assumptions are flawed. The system is not fit for purpose.

Thus, one of the tasks facing Mr Paterson is to look at the food control system as a whole, and to re-think the basic assumptions. This, doubtless, will bring him into conflict with the "colleagues", who will not be willing to admit the flaws they have introduced. On past form, they will instead be calling for "more Europe".

The battle lines, are beginning to be drawn. It will be interesting to see how the fight shapes up.