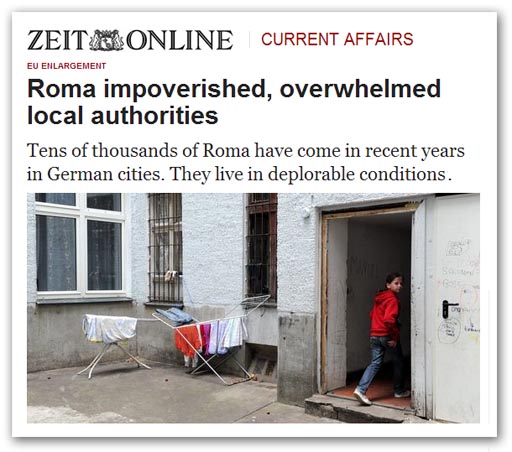 With its genius for missing the point, UKIP chose to make its stand on foster carers during the recent Rotherham by-election, instead of the very real problem of Roma immigration in the constituency. But, as we see from a report in today's Die Zeit, we are by no means alone in having to deal with the problem.

The piece features an internal report by the city council of Dortmund on poverty in migrants from Eastern Europe, which finds that, since 2006, the number of Romanian and Bulgarian immigrants to the Ruhr increased fivefold. In 2012, 3,149 lived in Dortmund, most of them in overcrowded houses fit only for demolition, paying overpriced rents.

The city speaks of 100 "problem properties" in districts that are already socially difficult. It finds that many Romanian and Bulgarian immigrants have no health insurance, and some suffer from infectious diseases such as tuberculosis.

Sub-letting is common, with families letting out already tight space to supplement their low incomes and, in a situation which mirrors Rotherham, children need to be taken into care just because of the housing situation. For vulnerable immigrants, in the Ruhr there is hardly any work, so there is much prostitution and begging.

But this is not new.  Roma have been a problem in Europe since time immemorial, and we have seenconsiderable problems in France and Italy, as well as Holland and Belgium.

The French treatment of the Roma was recently the subject of an Amnesty International Report (with a media summary here). According to this report, there are an estimated 15,000 migrant Roma living in France, most from Romania and some from Bulgaria, often fleeing poverty and discrimination in their home countries.

The French government, said Amnesty, was failing to meet EU and international human rights standards, as a result of which the population was sinking "deeper and deeper into poverty". No one was helping them and this would have "dramatic consequences for the future", president of Amnesty International France, Geneviève Garrigos, said.

At this stage, closing our borders in the near future is not an option. Desirable or not, this is not practical politics. Thus, this piece from 2009, headed, "We will send you our ravening hordes", is worth revisiting.

The lifting of the Iron Curtain in 1989 was always going to create difficulties  for the richer, developed countries of Europe, and one way to contain migration is to assist economic development in the former Soviet satellites. Perversely, buying meat from their abattoirs is one way of helping, keeping jobs local and reducing the pressure which triggers economic migration.

Perhaps UKIP should have a new slogan: "keep immigrants away: eat a horse".
COMMENT THREAD
Posted by Richard at 11:47