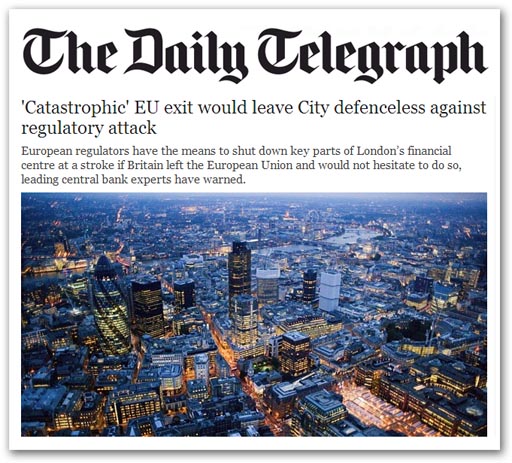 For anyone who might have thought that the Daily Telegraph in general, and Ambrose Evans-Pritichard in particular, was going to be in the side of the angels during any referendum campaign, today's article is the wake-up call. It combines the straw man technique with scary headline to produce a "perfect storm" of FUD, guaranteed to send all the City wuzzies scurrying to their bunkers to count their bonuses. Classic of its genre, the hook on which Ambrose bases his scary movie is Athanasios Orphanides a former member of the European Central Bank's governing council.

Orphanides is a member of the euro-elite and just the sort of person one would go to for a dispassionate account of Britain's prospects outside the EU. This is the man who served as Governor of the Central Bank of Cyprus, the country with a banking sector equal to 835 percent of its GDP, so large it is threatening to destablise the euro.

Greek-Cypriot bankers with such impeccable backgrounds are just the people to tell us that membership of the EU single market, "is the UK's only legal defence against an onslaught of regulations aimed at forcing banks and fund managers to decamp to the eurozone".  They are so well-equipped to tell us that, "It would be catastrophic and suicidal for Britain to leave. The UK would lose the protection it currently enjoys as the eurozone's major financial centre".

Yet this is a man who presided over a system of which it was said:

... it was clear there was a lack of substantial regulatory control on the banking system. Loans were often issued based on a network of personal relationships, starving those in the real economy – small and medium businesses and farmers – of access to finance. This is the evolution of a system that was functioning according to its connections with the political and the economic power, and in the end reached a point of even being above it.

Nevertheless, he is Ambrose's main source for his scary movie. You can just imagine Ken Clarke salivating over that one and Mr Orphanides will be a welcome guest in the halls of British europhila, featuring prominently on the BBC to warn all the wuzzies not to let go of nurse, for fear of their bonuses.

The gist of Orphanide's little gems is that the ECB, "is already clamping down on payments, clearing and settlement systems conducted in euros outside its jurisdiction, a move deemed necessary to head off future crises". Thus, he says, "The only thing stopping regulation that would shift all such activities from London to the eurozone is the legal protection the City enjoys in the EU".

This, of course, is moonshine. So huge is the London market, as one of the hubs of the global banking system, that if the ECB tried on predatory policies, it would be buried. Already fragile, the euro would be shattered by the onslaught of hostile trading, and the euro-wuzzies would be cleaning toilets for a living the following day.

Not least, we would see intervention by the Committee on the Global Financial System (CGFS), formerly known as the Euro-currency Standing Committee, currently headed by William C Dudley, President and Chief Executive Officer of the Federal Reserve Bank of New York. An assault on London by the ECB would be seen for what it is, a move to destabilise the market – the financial equivalent of a suicide bomb, and it would soon be seen off by the global financial system.

But then, the scary movie is only a figment of the imagination of the europhile FUD factory. While Britain is in a "very strong" position now as an EU member outside the eurozone, this would evaporate the moment the UK tears up its membership card, says Orphanide, unveilling his shiny new straw man.

Needless to say, Britain would never "tear up its membership card". Only the lunatic eurosceptic fringe advocate that. No sane British government would ever countenance leaving other than through a carefully negotiated exit, with alternative treaty arrangements in place before the knot was finally cut. That is the essence of Article 50.

But the Telegraph is not into sensible reporting. "Legal guerrilla warfare is already under way", writes Ambrose, then citing the paragons of impartial commentary, anonymous "EU officials".

These anonymous officials obligingly tell Ambrose, "privately", of course – so that what they say can never be checked, or attributed to any one person - "that the struggle for control over the financial industry is reaching a critical point, with Britain rapidly key losing allies". Well, they would say that, wouldn't they.

Needless to say, this assertion need a bit of bolstering, so off Ambrose trots to Rodney Leach's boy, Mats "renta-quote" Persson from Little Europe, to put more "F" into the FUD. "This is a very real threat", says Mattie, "what's the question?"

Lining up the skittles, Ambrose then adds Dino Kos, a former head of markets at the New York Fed, to say "the City is more vulnerable to a regulatory squeeze than people realise".

Then we get Graham Bishop, billed as "an expert on EU regulation". That is really scraping the bottom of the barrel. Graham Bishop is a self-styled consultant who openly admits to tailoring his services "to highlight my personal commitment to a deepening of European financial and political integration". There's "expert" for you.

But even this rabid europhile is not enough. To finish off this euro-wuzzie wet-dream, Ambrose recruits Giles Merritt, the head of Friends of Europe in Brussels, a temple of europhila if ever there was one. Predictably, he warns that EU leaders "could become vindictive if Britain's in/out referendum degenerates into a slanging match". "If British eurosceptics turn it into a sneering campaign against Europe, then the Europeans will play hardball", he says.

Well, you don't say. EU leaders vindictive? And this is a reason for staying in the EU?