Energy: we told you so 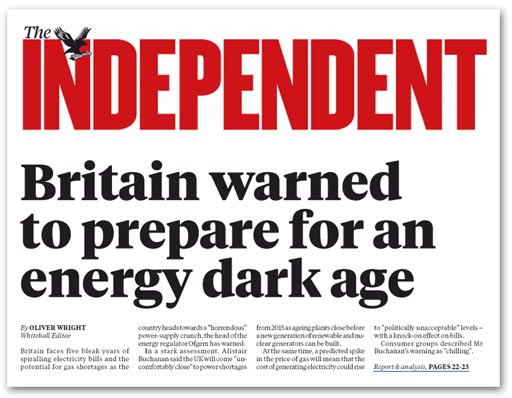 In a stark assessment yesterday, headlined by most of the legacy media, Alistair Buchanan, head of Ofgem, says the UK will come "uncomfortably close" to power shortages from 2015 …".

In a stark assessment published on this blog on 4 June 2008 (below), Richard North wrote, "by 2015 – if not before - we could be facing the most serious disruption to our power supplies since the 'three day week' of the 1970s".

But, as this piece records, we first wrote about this issue 10 October 2004 and really got into our stride on 17 December 2006 when we strongly suggested buying a back-up generator.

We were back on the case on 26 September, again on 2 October and yet again on 22 October. Then, on 12 November, in the context of the BBC finally doing a small piece about the possibility of power cuts, we noted the tendency of the media, by act and omission, the media, especially the broadcast media, it deciding for us what is and is not "news".

Now, after all these years, Mr Buchanan is warning that we face power cuts in 2015. And the media is at last deciding that this is news.