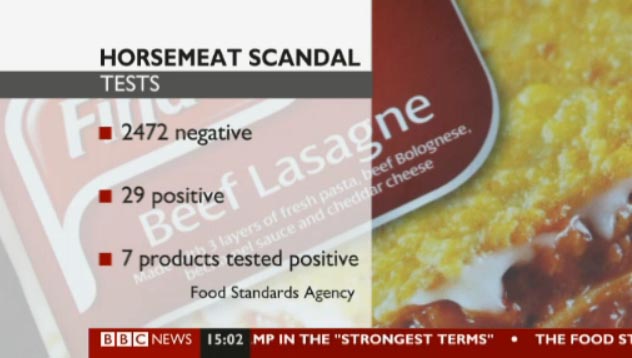 It is invariably the case in a major infectious disease outbreak that, at the very time when the illness – and the press coverage – seems at its peak, the epidemic is already on the decline. This is because there is usually a time lag between the reports and the events on the ground.The horsemeat scandal has some of the characteristics of an epidemic – I've heard such media fevers called "psychic epidemics", representing a disease of the mind, rather than a corporeal ailment. One can certainly see this in the Daily Mail yesterday which chose to feature a perfectly ordinary picture of the inside of a Somerset abattoir, where a slaughterman was preparing to shoot a pony (below). It is a scene familiar to anyone who has frequented abattoirs – as one does. The rifle in this case is being used because an equine skull is too thick for a captive bolt. But the muzzle of the rifle is correctly positioned, at the intersection of imaginary lines drawn between eye and opposing ear. The pony is calm and, as regulations require, tethered. A single shot will despatch it, cleanly and without pain. This is humane slaughter, an event which happens up and down the country thousands of times a year. Yet, forgoing any sense of proportion, the paper presents this as a "grisly scene", followed by the graphic detail of the animal flailing on the ground before being winched up "where her throat is cut with a razor sharp knife, severing the carotoid artery".These details, with the sequence wrongly described and key events missing, suggest that the author, Sean Poulter, was not present at the scene. He is fabricating a narrative with deliberate intent to shock rather than inform and educate. This is journalism at its worst – the writer as prostitute, a hack offering his favours for money. 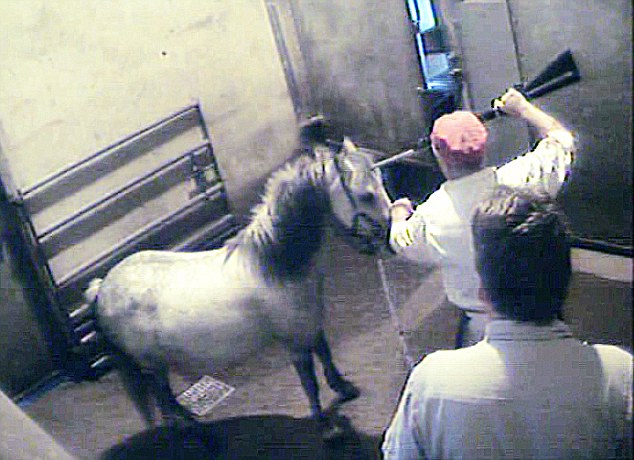 In a certain sense, though, there is encouragement to be taken from this low antic. If the Mail has to sink to such depths to achieve its effect, this signals that attempts at generating a full-blown health scare are failing. The shock quotient of the story is fading.

With the first major tranche of much heralded test reports in – after Owen Paterson called for a major test exercise earlier in the week - there is definitely a feeling that the scare has run its course. There have been 2,472 test made, only 29 are positive for horsemeat at low levels, found in seven products lines – all of which have already been withdrawn.

For sure, some horse meat has been found in school meals in Lancashire, in burgers from an Ulster hospital supplier, and the "pub giant" Whitbread has found horsemeat in its burgers and lasagnes. Those and sundry other items, such as the finding of trace horsemeat in an Asda chilled bolognese sauce, are keeping journalists busy.

Then, on the back of arrests in Todmorden and Wales, there have been three more raids, one on Hull and two in Tottenham. Flexi Foods Ltd in Hull have been targeted, after claims that it sold a large shipment to an Irish business McAdam Foods. Although it was labelled as beef, it was found to contain up to 80 percent horsemeat.

One of the Tottenham sites under investigation is Dinos & Sons Continental Foods Ltd. It has been asked to clarify its position in respect of the transportation and storage of frozen beef that was imported by, and belonged to, a third party that the FSA is investigating.

All the same, some of the heat and drama seems to have melted away. The papers are covering the story but without the same zest. Some are trying too hard, but they can't sustain it. By Sunday, unless something drastic happens to stoke the flames, the "scare" will be dead on its feet. Next week, the issue could be struggling to find media space, unless the hacks can find something dramatic to ramp it up a notch.

Perversely, this makes for the most dangerous period. As media interest gradually fades, the regulators will take over. Already, the Commission has proposed an ambitious "Product Safety and Market Surveillance Package" for 2013.

This is intended to "improve the safety of consumer products circulating in the Single Market and to step-up market surveillance concerning all non-food products, including those imported from third countries". It is only a matter of time before the diligent eurocrats come up with a matching package for food products, calling in aid the horsemeat crisis.

By then, of course, the little Englanders of the legacy media will have lost interest. They can handle scares, they can create and magnify alarums, but they don't "do" Europe. If nothing else, this current episode has demonstrated that.

But, with Owen Paterson at the helm, their education has started. The "elephant" had an outing this week. It is not going to be so easy to put it back in the closet.