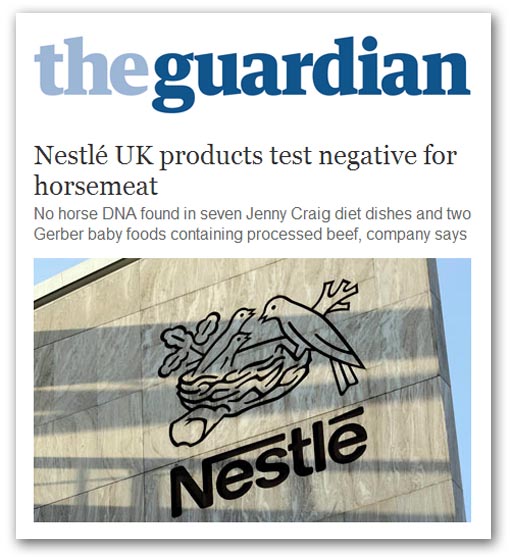 Watching the British legacy media for news of the Davigel development yesterday offered an interesting illustration of the shallowness of contemporary journalism. Not one media outlet picked up the significance of a major catering supplier selling ready-meals adulterated with horsemeat, in an affair hitherto dominated by supermarkets and their suppliers.
By far the most fatuous coverage though was in the loss-making Guardian which needed three journalists to tell us that Nestlé products in the UK had tested negative for horsemeat. This is a classic example of "planting a flag" on an international story, behaviour which is not untypical when reporting EU affairs, something which tends to happen right across the political spectrum.

And in this case, only later in the piece did we see the Guardian trio deign to tell us that Lasagnes à la bolognaise gourmandes, "a frozen meat product for catering businesses by Nestlé Professional produced in France, will also be withdrawn from sale and replaced with product made from 100% beef".

This was a direct copy-and-paste from the Nestlé press release, one which will no doubt go down in the annals of PR coups as an example of how to say as little as possible while avoiding accusations of a cover-up. How well Nestlé understands the media, knowing that, unless every detail is spelled out, it most likely will not be reported.

However, there is possibly a broader agenda here, in that most of the media, and especially the Guardian is anxious to hammer the supermarkets. Crucially, they seem anxious to sustain their narrative against "cheap food", presenting the image of the profit-centric capitalist running dogs in the retail sector driving down prices so much that the substitution of lower-cost horse meat was an inevitability.

In the Guardian, there is a certain amount of intellectual and ideological incoherence. A newspaper which supports the "deserving poor" on the one hand, also detests the idea of cheap, mass-produced food, and hankers after the bucolic days of local butchers, farm-fresh foods and hand-made produce.

The idea, therefore, that we have a company selling high-end catering products to pretentious French restaurants, passing off over-priced, microwaved fare as "home made", doctoring their meat so as to improve their margins, is not one that fits the current narrative. It maybe that, on a different occasion, it would serve as a running theme, but this line does not fit in with the anti-supermarket narrative. Hence, it remains conveniently obscured.

The big irony though, is that this hankering after a bucolic past is chasing an image that never existed. The "local butcher" of yore, was just as capable of defrauding the public as his modern successor, as this piece recalls.

Here, we see a Bristol-based trader fined £300 after supplying beef containing 25 percent horsemeat which ended up at a butcher's shop in Cheltenham. The only things that have changed are the scale of the fraud, and the international dimensions.

As to food safety, one needs to recall that the most deadly outbreak of E. coli O157 was traced to a local butcher who had recently won the award for Best Scottish Beef Butcher of the Year. Another major E. coli outbreak, this one in Wales, was caused by a local butcher who had also been buying frozen New Zealand mutton and passing it off as Welsh lamb, using the flock number from his farm on the paperwork.

This, incidentally, was the same local butcher who had members of staff at his local meat processing plant repackaging decomposing meat and sending it out to schools.

The point, of course, is that fraud is fraud, big or small, international or local. This current rash of food adulteration is nothing new – it is simply fraud. But, as the Guardian indirectly indicates, a series of criminal events have been hijacked to further numerous agendas, without in any way addressing the core issues.

And this is the problem with this whole affair. The root problems have been misdiagnosed, the agenda-pushers have hijacked them for their own purposes, and now we are facing the wrong remedies for wrong problems. Meanwhile, the thieves will already have  moved on to the next undefended targets.