Media: the "incompetence" of the Times 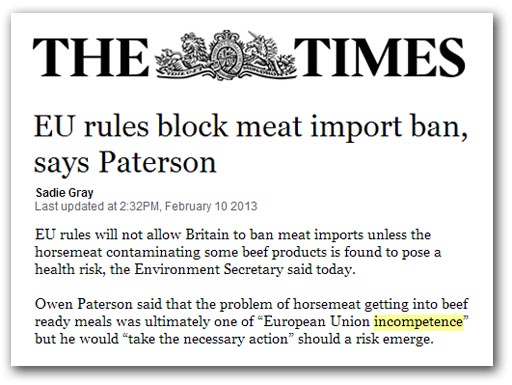 If ministers did their jobs as badly as the media seem to be doing on the horse meat "scandal", then we would be in real trouble. And, it seems, there is no end to the ability of the fourth estate to mess it up.
Thus, when Owen Paterson tells Andrew Neil that he can't ban imports because this is an "EU competence", the lowly Scottish Herald manages to get it right, but not the mighty Times. There, reporter Sadie Gray manages to translate Paterson's words into "European Union incompetence".Now, it is certainly true that the EU is incompetent, certainly in devising effective food law, but that is not what Paterson said. And while we would like to think that the error is a slip of the finger (it happens), we suspect it is not - especially when the same mistake is repeated in The Daily Telegraph (below), The Sun and the Daily Mail.

Rather, it points up the growing difficulties experienced in talking to the media. Their understanding of things EU is so basic, that it is almost impossible to find a low enough level at which facts can be communicated with any certainty that they will be understood and passed on correctly. And nor, it would appear, is this error without consequences. The Independent reports that French consumer minister, Benoît Hamon, "took a swipe at the British Government". He said that London "was complaining about weak European food inspection while cutting the budget for EU food-safety checks in Brussels".Yet, the only occasions where there have been apparent complaints by the British government about European inspection is where Mr Paterson is misquoted as complaining of "European Union incompetence". Wars have been started over less.Thus, while the EU has its competences, the media increasingly can only offer incompetences. No wonder it is a dying industry. COMMENT: "MEDIA" THREAD
Posted by Richard at 13:21