EU politics: money down the drain 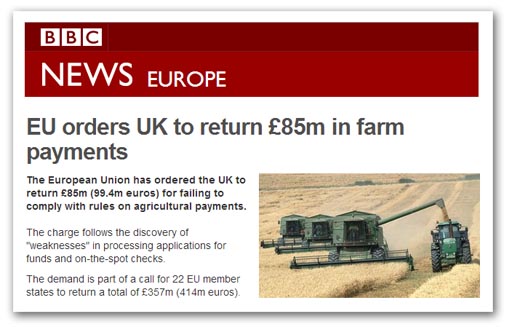 Last year, the National Audit Office was reporting that the Rural Payments Agency, which administers EU farm subsidies, had incurred penalties as a result of weaknesses in management and administration to a total value of £590.4 million since 2008-2009, including provisions for an estimated £125.4 million in penalties which had not yet been finalised.

Then, yesterday we learned from the BBC that the European Commission has ordered the return of £85m for failing to comply with rules on agricultural payments. Again, this is the result of "weaknesses" in processing applications for funds and on-the-spot checks.

I suppose, considering what we have had to pay previously, this should be considered an improvement, although of the £357 million demanded from 22 Member States, the UK is being called upon to pay the largest amount. Next on the list is Italy, having to pay back £41.6 million, even if it is doubtful whether the money will ever get to Brussels.

However, £85 million is still a lot of money and we are not so flush that we can afford to give it away. The one thing you can be sure of though is that no one will be fired, no one will even be censured and, if there is any shortfall to be made up, the taxpayer will pick up the bill.

That is one of the joys of working in government. You can pour zillions down the drain and nobody thinks any the worse of you, even when the EU is the beneficiary. Should thee or me commit such a heinous crime, however, we would never hear the last of it.

Perhaps we should all apply for jobs with the Rural Payments Agency – we could hardly do worse than the present incumbents.
COMMENT THREAD
Posted by Richard at 16:28