Media: no wonder we have a problem 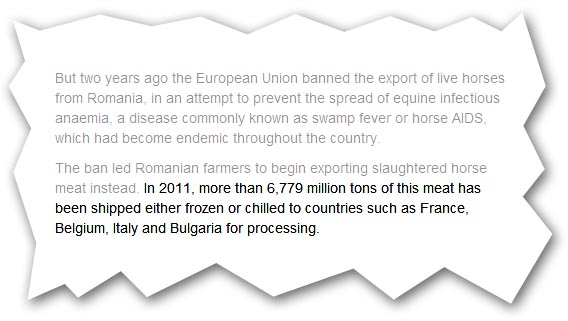 According to the skilled and dedicated journos of The Sunday Telegraph, Romania exported nearly seven BILLION tons of horsemeat to EU member states in 2011. At current prices, that would work out at a value of about €20 trillion - more than the entire value of the EU economy for that year (about €12 trillion).
We now have an explanation not only for the horsemeat crisis, but also the economic crisis. Europe is drowning in horsemeat.

But, if the Telegraph would thus have us drowning in horsemeat, the Independent on Sunday doesn't do so much better. It has Canada exporting 1.8 million tons of horsemeat to France in 2011, with Mexico sending another 1.2 million tons. The actual figures are, respectively, 1,800 and 1,200 tons.

Newspapers these days are becoming a joke. Not only are their journalists profoundly ignorant, they are also inumerate. If these figures were taken at face value, they would represent something like 10 million horses – 50 times the entire number of horses (200,000) slaughtered in the EU annually.