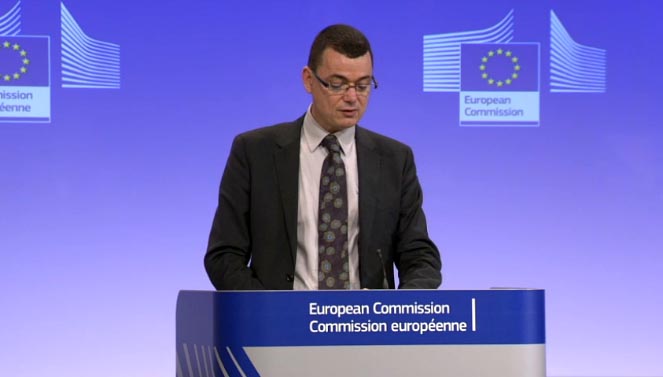 The picture above is not particularly dramatic but,  by clicking on this link, you might think you were looking at Commission spokesman Frédéric Vincent delivering yesterday's midday press briefing to journalists.In fact, though, what you were looking at was a representative of our masters handing down their judgement on what things are to be or, more accurately, how they would wish them to be. The proximate issue here is neonicotinoid insecticides and their effect on bees, about which we wrote in November last. But that is only the tip of the iceberg. What matters here is not so much what, but how – and whom. The thing here is that this group of insecticides may or may not harm bees – the jury is out on this, but it does mean that there are calls for the products to be banned. If we were an independent nation, the decision would be made by our own Secretary of State for agriculture (Defra). But it is a long time since we enjoyed that status. Clues to our second-class status abound, one in a sequence being the press release issued by the 3,216th meeting of the Agriculture and Fisheries Council in Brussels on 28 January. And yes, dear readers, there have been 3,216 meetings. Assuming they take one day each (and some go much longer), that is nearly ten whole years, as close a description of purgatory as can be imagined – a ten-year council meeting. Anyhow, the press release tells us that, at the request of the Dutch delegation, the Commission reported to the Council on the European Food Safety Authority (EFSA) about the risk assessment of neonicotinoid insecticides with regard to bees. This request came in on 24 January, with the Netherlands asking the European Commission to take action on a "community level".As it happened, EFSA had reported on 16 January that it had identified a number of risks posed to bees by three neonicotinoid insecticides. Crucially, though, it reported that there was "a high level of uncertainty in the latest evaluations", which meant that EFSA's scientists "were unable to finalise risk assessments for some of the uses authorised in the EU".With nothing specific to go on, at the Council meeting, "many" member states nevertheless supported a suggestion from the Netherlands to initiate an action at community level "where high risks have been identified or could not be excluded in relation to certain aspects of the risk assessment for honey bees". This latter phrasing shrieks of "precautionary principle" and it will come as no surprise that some member states – our own included - considered that further scientific advice should be sought before taking any action. Taking no action, though, is not something for which the Commission is famed. It blandly informed the Council that it would "shortly" present proposals to apply "both the precautionary and the proportionality principles" to the issue. Sure enough, on Wednesday, the Commission gave early warning that it would present a discussion paper to Member State experts at a meeting of the standing committee on pesticides, aiming "to exchange views on the range of policy options available".

Said Tonio Borg, Commissioner for Health and Consumers, "we now need to carefully assess all the policy options that are available to us before bringing forward any legislative and harmonised proposals".

And so it was yesterday that we had M. Frédéric Vincent telling us that the Commission proposed that the Member States suspend for two years the use of these pesticides in seeds, granulates and sprays for crops which attract bees; sunflower, rape, maize and cotton.

Vincent acknowledged that the issue had been on the table of the Council on Monday and it was true that some delegations expressed the view that it was necessary to pursue further analyses. Some big countries, he also said, "didn't express their view" but there was to be a "discussion". Member States would react and if there was a regulation, it would be before March.

This has now been processed into news by the assembled hacks, a typical result emerging in EU business, with the headline: "EU urges two-year ban on 'disturbing' bee insecticides".

Interestingly, the copy tells us that, "the EU urged national governments on Thursday to ban pesticides deemed dangerous to bees by scientific experts in a bid to prevent a disastrous collapse in colony numbers for an insect considered vital to the integrity of the human food chain".

We also learn that "major EU states Germany, Britain and Spain", amongst others, indicated serious reservations about the plans, but the decisive meeting is set for 25 February. The chemicals then to be discussed are clothianidin, imidacloprid and thiamethoxam, produced by pharmaceutical giants Bayer, Syngenta and Cruiser OSR.

Cut to Bayer CropScience, which believes that "the Commission's overly conservative interpretation of the precautionary principle is a missed opportunity to achieve a fair and proportional solution". It wants the Commission to refer back to "solid science" before making any proposals.

The Company was a little more robust to the House of Commons environmental audit committee recently, having its Dr Julian Little telling MPs that the EU was in danger of "enshrining some sort of museum agriculture".

"I personally absolutely support very strict regulation, but not to the point where we believe you are taking out major advances in chemistry and major advances in agriculture with no discernible improvement in bee health", he said.

Defra rejected a ban late last year saying the scientific evidence wasn't clear, and have commissioned new studies that will look at the impacts of neonicotinoids on bumble bees in field conditions. Unfortunately, the results of those studies are not yet available.

But what Defra thinks doesn't really matter. We are one voice in 27. The "experts" of the standing committee will do the deed, using the comitology process. Rumour has it that there are only three people in the world who have understood the process – one is dead, the second is in a mental asylum and the third exiled himself to a desert island. But whatever the committee decides, we will comply.

That is how our government works.