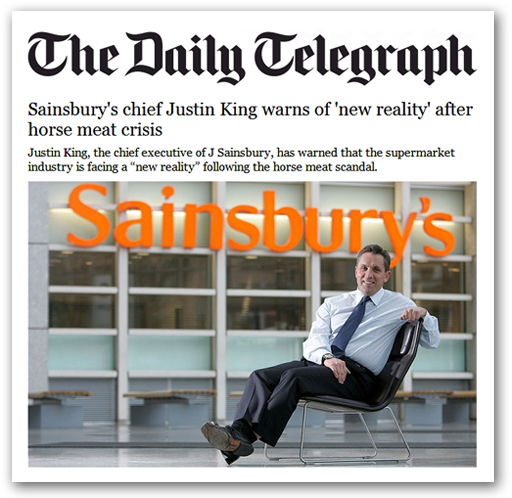 Alpha male and multi-millionaire Justin King, Sainsbury CEO, is sounding off in The Daily Telegraph, telling us something we might just have been able to work out for ourselves – that trust in retailers has been "severely damaged" by the discovery of horse meat in supermarket products labelled as beef.King, at least, has a background in food although his mouth probably prevented him learning as much as he could from the experience, and he certainly does not go out of his way to make friendswith the lower orders. True to form, he addresses the argument that that supermarkets pushing down costs have forced suppliers to compromise on quality and safety checks and processes, and that "some type of contamination was a scandal waiting to happen".This is as neat a straw man as you can get, and then King spends his time telling us that the industry is facing a "new reality", as the horse-meat scandal has "identified potential weaknesses in the food supply chain that must be addressed with urgency and rigour". Then follows several yards of corporate BS which show that this over-paid apparatchik has about as much a grasp on the issues as the greens, who put the "scandal" down to glaringly obvious "light touch regulation".It is getting to be a characteristic of this affair that those who know least are saying most (in public, at least), joined by media pundits such as Leo McKinstry who consistently go for the cheap shot instead of getting down to the real issues. As far as Justin King goes, the closest he gets to being right is to doff his cap to the argument that this was "a scandal waiting to happen", even though he doesn't have the first idea why. On the other hand, the only thing we can aver it that the causes are complex, and we are going to get more of this type of incident unless they are addressed. And given the huge cost and disruption so far caused – right across Europe – it is worth spending the time an effort to get to the bottom of the affair, as Owen Paterson has pledged to do. 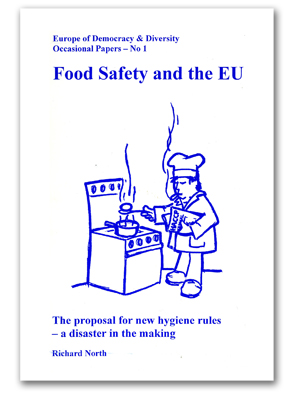 For me personally, the interesting thing is that, not only did I warn that this was indeed a "a scandal waiting to happen", I actually put it in writing, publishing for UKIP in September 2000, a booklet entitled Food Safety and the EU, sub-titled, "The proposal for new hygiene rules – a disaster in the making" (pictured right). Thus, over twelve years ago, I am on record as saying that the regime that the European Commission was then intent on introducing, was going to end in tears, and so it has come to pass. Millions have been lost, thousands of tons of food have been wasted, and industry badly disrupted. However, it would be wrong to say that this was a disaster wholly manufactured in the EU. As I explain in my booklet (page 18), there is a British contribution as well, which goes under the title "due diligence". This was a statutory defence, which I touched on briefly in an earlier piece, introduced under the Food Safety Act 1990, which allows food businesses to escape conviction for offences under the Act" if they can prove that they "took all reasonable precautions and exercised all due diligence to avoid the commission of the offence".To be fair, the introduction of a "due diligence" defence was very necessary, as major manufacturers and retailers were being prosecuted unnecessarily, for quite the wrong reasons. I will explore this in more detail in a future post, but suffice it to say that, the EU's mandatory implementation of HACCP gave food business operators, and especially retailers, a "get out of jail free" card, which would effectively give them immunity from prosecution. This, back in the year 2000, had me writing that major operations would be aware of the possibilities which HACCP afforded in protecting themselves, and would "tend to devise systems which maximise the success of a 'due diligence' defence". Since the defence tended to rely on the documentary trail, I wrote, "emphasis will inevitably be on continuity of paperwork and recording, rather than on ensuring that systems are fully functional". That is exactly what has been happening with the sale of process meats containing horsemeat. All the retailers will have their "due diligence" defences dusted off.    As to preventing a recurrence, Justin King didn't join Sainsbury's until March 2004, charged with restoring the fortunes of this ailing retail giant. For his shareholders' sake, I hope he is better at retail strategy than he is at this game, otherwise we will see this happening again. And next time, people might die.

The prognosis does't look good though.  Some will argue that King doesn't even particularly shine at retailing. Certainly, he needs properly to address the "new reality", about which he talks. The corporate BS on offer doesn't cut it.