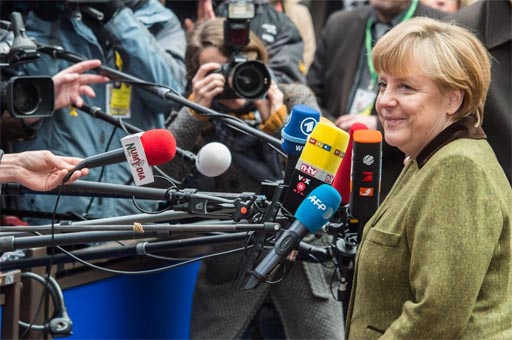 Even with the supposed victory announced this morning, nothing actually has yet changed. The €960-billion "cap" on the seven-year, multi-annual budget, is nothing but a starting gambit, representing the position agreed by the European Council.

The British media, as usual, have been playing planting a flag on the story, the journos attempting in their tediously superficial way to turn it into a biff-bam story that their editors back home can understand.

David Cameron was set up to be the hero of the hour, girding his loins to launch another of his famous vetoes unless he came back with a deal. Hollande was cast the Bad Guy by the British, although the German media focus was on European Council President, Herman Van Rompuy.

Nevertheless, while Mr Cameron prattled about "cuts or veto", it must be remembered that there is another party to these negotiations – the European Parliament. Die Welt understands this, referring to it as the "invisible partner" – brought in by the Lisbon Treaty.

Thus, while the pics are of Merkel, Cameron and the other EU "leaders", and the talk is of a great "victory", the man once dubbed as a Concentration Camp guard, President Martin Schulz, is the man with the final say. It doesn't matter what the "leaders" decide. If Schulz is against the deal, Parliament will most likely reject it.

As it stands, Schultz and many of the "colleagues" would prefer a breakdown, rather than the Cameron deal where the Council appears to have agreed substantial cuts. In the event of a breakdown, a default budget kicks in – based on the previous year's funding plus inflation.

Since that is more than the current deal on the table, the Parliament could live with a crisis budget, leaving the "colleagues" to manage the funding on a year-by-year basis, foregoing some of the multi-annual programmes. This is certainly what the French seem to be predicting and would go for, as it would protect CAP spending at the expense of programmes such as research.

With these additional possibilities thrown into the mix, this makes the theatre all the more entertaining, but no more informative. Whatever the deal, it isn't a deal until Mr Schulz say "yes" – and that might take some time.