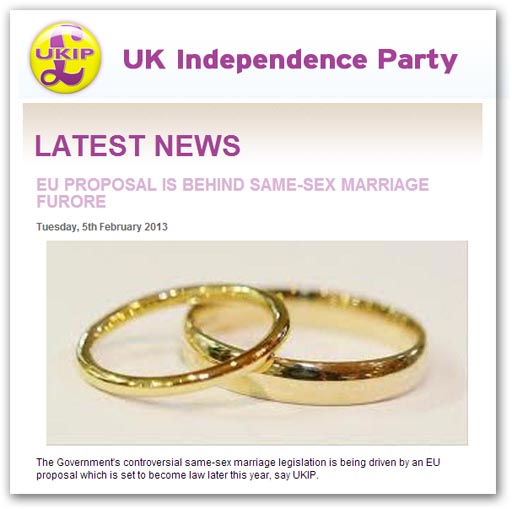 UKIP has made an interesting contribution to our understanding of the European dimension of homosexual marriage – and thus to the way we are governed - with a press release headed "EU proposal is behind same-sex marriage furore" (illustrated above).
Rightly, they draw attention to the cross-border anomalies – specifically in terms of freedom of movement and the recognition of "civil status" documents – which has been the subject of considerable exploration in the European Parliament (where two detailed reports have been drawn up by the services, one in 2010 and another in 2012 - all on the back of the so-called "Stockholm Programme".
However, it is perhaps going a little too far for Nigel Farage to assert via his party's press release that a particular report, which he identifies as the Berlinguer Report, is driving Mr Cameron's "controversial" same-sex marriage legislation.
According to UKIP, this "EU proposal" is due to be voted through the EU Parliament this November and is set to become law later this year, making all marriages and civil contracts conducted in any EU country legally binding in all other member states.
Paragraph 40 of the Report, we are told, would mean that any member state would have to grant "all social benefits and other legal effects" such as legal recognition, tax breaks and benefit entitlements to a married couple, even if such a marriage did not exist in their own legal system.
Says Mr Farage: "Now we know why David Cameron has launched this highly contentious and disruptive legislation, apparently out of the blue". He adds:


If a couple were to marry in Belgium, Spain, Portugal or Sweden where same-sex marriage is possible, the EU will say that they have to be given the same legal rights in whichever member state they then chose to live – even if that state itself opposes the introduction of same-sex marriage. In essence the Berlinguer Report seeks to establish an EU-wide right to same-sex marriage.

Farage then goes on to say:


It's no surprise that the Prime Minister has kept quiet about this, even at the expense of cohesion in his own party. He has a hard enough time trying to force his own backbenchers to swallow both his dedication to keeping Britain in the EU and his wish for the state to interfere in the definiton (sic) of marriage. To suggest that the two issues are in fact interconnected would have caused complete uproar.

Although this press release is repeated verbatim by Roger Helmer on his blog (below), and accepted uncritically by some of his followers, sadly, there are a few slight problems with citing the Berlinguer Report as the "smoking gun". 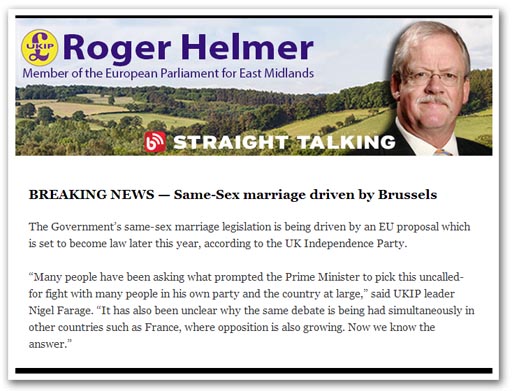 Firstly, it is a European Parliament "own initiative" report, which means it has no legislative status, as Helmer (and UKIP) might have realised had they looked it up on the Legislative Observatory. There also, they would have found that it was responding to a European Commission Communication COM(2010) 171 final on "Delivering an area of freedom, security and justice for Europe's citizens".

This, we are told, is the "Action Plan Implementing the Stockholm Programme". The clue to its status is fairly easy to decipher. It is described as a: "non-legislative basic document".

Another possible problem with suggesting that the Berlinguer Report "proposal" is "is due to be voted through the EU Parliament this November and is set to become law later this year" is that it was published in September 2010 and voted through in the European Parliament on 23 November 2010 - i.e., over two years ago.

Despite this, the theme is picked up by Cranmer (illustrated below), who is cautious enough to ask the question, without jumping down from the fence. Strangely, what he claims is the report is a Commission document - a "roadmap" setting out an indicative timetable for a "Legislative proposal on mutual recognition of the effects of certain civil status documents". 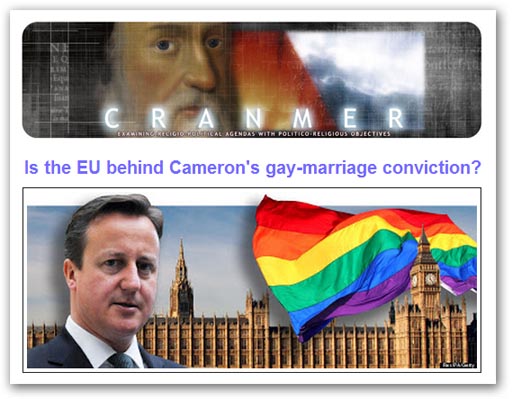 This gives an "expected date of adoption", which of course refers to the date the Commission might adopt a legislative proposal – the start of a long uncertain process, not the end of it.

As to the fabled "paragraph 40", this was highlighted by European Dignity Watch on 12 November 2010, which seems to have "inspired" the UKIP press release. Here we have Dignity Watch state:


Paragraph 40 wants to give civil documents, including marriage, to be given de facto legal effect throughout the EU by requiring Member States to grant "all social benefits and other legal effects attached to it". This could mean that Member States would be forced to indirectly recognize same-sex unions as equal to marriage even if such recognition does not exist in the respective country's legal system.

And here we have UKIP recycling the two-year-old statement, stating:


Paragraph 40 of the Report would mean that any member state would have to grant "all social benefits and other legal effects" such as legal recognition, tax breaks and benefit entitlements to a married couple, even if such a marriage did not exist in their own legal system.

The actual Paragraph 40, however, does provide some credence to the  Dignity Watch assertion, for it "stresses the need to ensure mutual recognition of official documents issued by national administrations", and "strongly supports plans to enable the mutual recognition ofthe effects of civil status documents" (my emphasis).

That really is the interesting bit. It seems that – should legislation ever be issued to that effect - the UK would have to pay qualifying couples relevant benefits including same-sex married couples, as long as the marriage took place in another EU member state which recognised the status.

However, while this illustrates the way the EU can ramp up the pressure towards homogeneity in social affairs, even where it has no direct legislative competence, there are as yet no publish plans to turn this "support" into law. Nor is there any indication that the precise issue of benefits will be included in any proposal that does emerge.

This, then, is not something which is going to get Mr Cameron storming the ramparts to get same-sex marriage through the Westminster Parliament so quickly. The UKIP scenario is far too tentative to be a "smoking gun".

Real life is far more complex, as we see from our own pieces. The place to start looking is the Council of Europe, although, as UKIP indicates, it is the concert of the different bodies which ramps up the pressure and has the final effect.