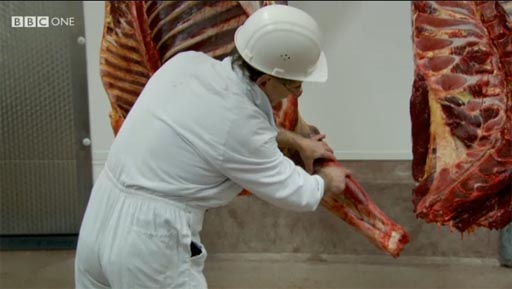 Much against my better judgement, I watched both Dispatches and Panorama last night, both claiming to give the inside story on the horsemeat scandal.

I think it is fair to say that the programmes were very similar in their approach. Both sought to target supermarkets and both sought to ramp up the health scare, featuring Irish horses and the "bute" horse painkiller.

Panorama ran with the "cuts" meme, using a darkened profile of our newly retired meat inspector, telling us how reducing the hours of inspectors in cutting premises caused the adulteration of meat in a French-owned food processor, based in Luxembourg.

This was formula journalism at its worst. We were treated to an utterly stupid sequence, showing the difference between a horse and beef carcase (illustrated), but was given no inkling at all of how the horsemeat would have been used, and how thus it escaped detection during manufacture.

Even though the French government investigation is now in the public domain, we got nothing of the recent details about how Spanghero was at the heart of the fraud. Yet, as far as both programmes went, they were supposedly telling us who was "really to blame" for horse entering the food supply.

Needless to say, we got nothing of the "bigger picture", that this episode was but one example of food fraud, which is endemic in the food business, and that the system simply is not geared to detecting such fraud.

Nor did we hear anything coherent of the role of the EU, despite the fact that food law is an exclusive competence. Both programmes interviewed Owen Paterson, but neither had him repeating what he has so often said elsewhere, that the EU system has prevented a more hands-on regime being used.

Panorama made extensive use of Malcolm Walker, the chief executive of UK retailer Iceland, dismissive of the scare, saying his firm did not test for horsemeat, but it did not test for cat or dog either. "You can't test for everything', the programme had him say.

For us, though, it is easier to deal with what the programmes did not say. This was food fraud spanning a period of over six months, with 750 tons of horsemeat adulterating 4.5 million meals passing through a single processor. And no-one noticed. The quality regime in the factory failed, and the official inspection regime failed. Yet neither programme seemed in the least interested as to why.

And this, of course, is only one of the adulteration episodes. The original Irish findings came from another source, and we have yet to get to the bottom of it. From one of the programmes – I can't remember which one – we got a frankly risible account of how the Irish Food Safety Authority (FSAI) "thought like a food fraudster" and somehow divined that horsemeat adulteration was the thing to look for.

Perhaps the programme researchers should have read The Groocer which retailed Owen Paterson telling the Commons that the FSAI "acted on specific intelligence" when deciding to test, despite insisting that its tests were simply part of its routine monitoring.

Perhaps then we ought to leave the last word to Paterson. As recorded by the Independent, after his meeting with the supermarkets. "They all assured me that they will not rest until they have established the full picture. There is still much to be done to find out exactly how this happened and how it can be prevented from happening again... ", he said.

Whatever else, watching either Dispatches or Panorama wouldn't have told you what happened. These programmes didn't even appear to have been interested in finding out. They had their narratives, and that's all they needed.