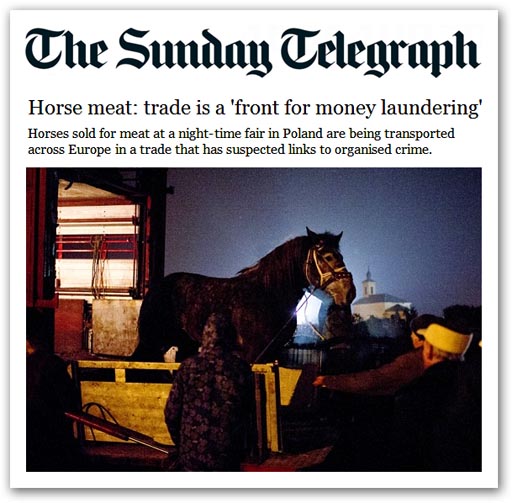 A rather lightweight girlie piece in The Sunday Telegraph yesterday devoted nearly 1800 words to stream-of-consciousness mush about Polish horses.The only useful information could have been covered in an article a fraction of the length, pointing to what appear to be over-generous prices paid for horses on the hoof. An old mare, it was claimed, had been sold through the Skaryszew market for 7,000 zloty, equating to about £1,400 or €1,700. We were further told that the farmer selling the animal expected 5,000 zloty. Journalist Claire Duffin thus asserted that the farmer was paid almost £3.40/kg for his horse – close to €4/kg. Yet, she wrote, the most expensive horse meat, from foals, fetched only £2.40/kg (€2.75/kg) in Italy, where the animals are mostly slaughtered. By contrast, in the UK, unwanted horses which end up in the food supply, can – according to one horse charity - be sold for £100 or less, making slaughter a lucrative proposition in the UK. On this basis – and with the help of the World Horse Welfare charity – Duffin concluded that "a more sinister set of suspicions hang over the whole horse trade in Poland: that it is a front for crime". The charity, and the Polish authorities, suspect that the horses are being used in a form of money laundering. Horse selling is a trade that has been going on a long time. In February 2000, the BBC reported on it, using Compassion in World Farming (CIWF) to claim that about 100,000 horses a year were exported by road to Italy, mainly from Poland and Lithuania, and about 7,000 donkeys, most of them from Romania. The movement of horses, Duffin tells us, creates a convenient paper trail for gangs to "clean up" dirty money. By exaggerating the value and number of horses moved, they can explain the existence of large amounts of cash gained from less legitimate enterprises. Paying farmers "slightly over the odds" for their animals is, then, a small price compared with the potential profits. It would have helped here if we actually had the comparator, in order to understand what we are dealing with.. Duffin's data seems thin, and she could be getting her information from something likethis site, which offers an untypically low figure for meat, from France in 2004. We don't really get an idea of what is involved. Currently, it seems, trade prices for Romanian carcase meat can be €3.50/kg. Frozen Polish (boneless trimmings) can be bought for €4/kg, but there have been reports of sales at as little as €2/kg. Doing our own calculations, meat yield from a horse may be less than 40 percent of live weight. Thus, to cover a price on the hoof of €4/kg, boneless meat would have to average at least €10/kg - to which must be added transport and processing costs. Duffin and her sources are thus right to be suspicious of the prices paid in Skaryszew market, especially if meat is being sold at €2/kg. There is another oddity about the Polish market though, which Duffin does not discuss – the fact that almost its entire legitimate horsemeat export volume was sold to Italy. According to Eurostat, of the 13,016 tonnes exported by Poland in 2010, valued at €34,625,817, 12,988 tonnes went to Italy. In 2011, the Polish exported 12,598 tonnes, valued at €35,299,856. Of that all but ten tonnes ended up in Italy. What is not explained is why so much is trade is done with Poland. The next largest trading partner is Spain, from which Italy takes 3.8kt. Belgium supplies 3.7kt, while France sends 2.6kt. Romania sends a mere 1.7kt. As to the statistics for Italy as a whole, home meat production (2011) was recorded (by Eurostat) as 24.5 kilotonnnes (kt), with imports of 27kt. A negligible 1.7kt of exports are recorded, making total home consumption in the order of 51kt, over 60 percent of total EU consumption. What goes into Italy seems to stay in Italy, in a market that worth about €100 million at wholesale prices. However, both the Observer and the Daily Mail assert that Polish and Italian "mafia gangs" are involved in the trade. If this is the case, it may well be through unrecorded trade, a situation which is compounded by the poor state of official statistics. Not only do there seem to be significant differences between Eurostat and FAO databases, which ostensibly measure some of the same things, there also seems to be a mismatch (in Italy at least) between datasets on domestic meat production and number of horses slaughtered. Italian data, for instance, has 67,000 horses slaughtered in 2010, producing 17.9kt of meat (carcase weight – 178,827 metric quintals), as opposed to the figure of nearly 25kt meat, offered by Eurostat (equivalent to 34kt carcase weight - nearly double that recorded). It would be easier (although somewhat dishonest) to pick one set of statistics, and stick to them. You get this with newspapers, having The Daily Telegraph report in 2010 what it claims to be the FAO figure of 213,000 horses being slaughtered for food in Italy "every year". Yet the Italian government recorded for 2009 the number of 84,063 – of which 45,757 were imported. All the indications are, therefore, that there are significant gaps – or discontinuities – in some of the statistics. 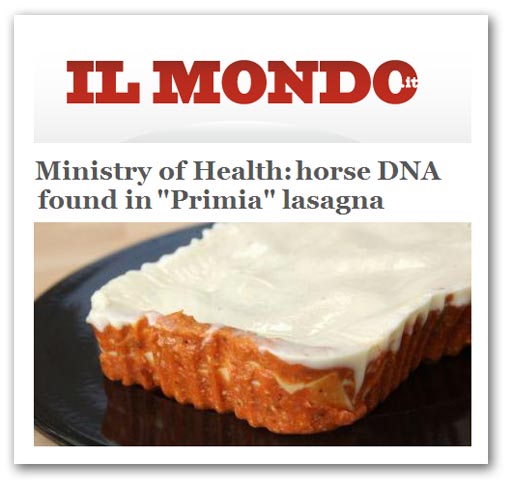 Even then, the plot thickens. While the bulk of horsemeat in Europe is processed in Italy, so far, as of yesterday, only one Italian processor has been implicated in the horsemeat fraud. This is the Prima group. From this firm, so far, only about six tons of frozen beef lasagne have been seized.

By contrast, there have been two major units in Germany, with another implicated. This latter unit is the German firm Dreistern Konserven, which produced goulash for Aldi, in which horsemeat was found - and which bought its meat via a dealer from Mipol, a Polish-based firm. There have also been – as yet unproven – links with the Irish horsemeat findings and Poland.

It cannot thus be said that Poland is in the clear, but it also cannot be said that we yet have anything like a clear picture of the horsemeat trade in Europe, nor even the movement of horses.  There may well be Polish/Italian mafia links - but that may not be behind the current horsemeat fraud.

However, there is another dagger at the heart of the EU's Single Market. We are told so much about how much trade is facilitated through this construct, but when a light is shone on just one tiny sector, the statistics fall apart, and the mechanisms of trade are unknown in detail. Neither the European Commission, nor anyone involved in it, really knows what is going on.

Interestingly, there is an EU Agricultural Council today (Monday), at which our own Mr Paterson will be present. The one thing he could demand, rather than more labelling, which might obscure more than reveal, is for the European Commission to come up with a definitive report, with reliable statistics, on how the horsemeat trade actually works.