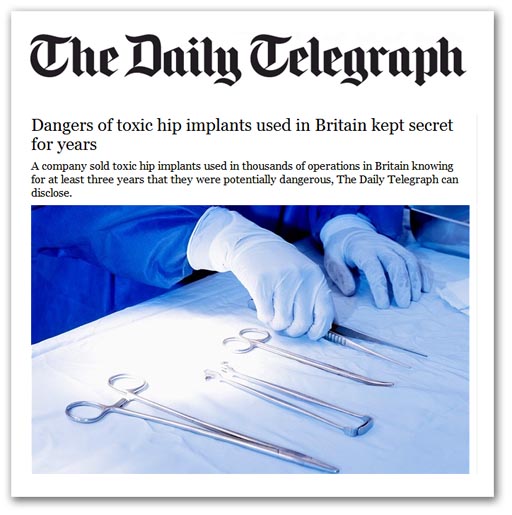 There were, we wrote just over a year ago, 113 alerts issued by the Medicines and Healthcare Products Regulatory Agency (MHRA) about medical devices the previous year. The products ranged from hip joints to surgical instruments, but the agency had no power to check devices until a failure was reported.This was in the wake of the PIP breast implant scandal, when we were shouting from the rooftops about the failures of the EU regulatory system. And now the Daily Telegraph has "revealed" that the health of British patients was being potentially put at risk by European regulators "who were prepared to license potentially dangerous medical implants for sale in this country".These are ASR hip joint replacements, produced by DePuy Orthopaedics, a subsidiary of the American firm Johnson & Johnson. They are metal-to-metal hip implants, launched in 2003, which have now been shown to be faulty. Problems were reported as early as 2006, the product type was withdrawn in 2009 from Australian and US markets, but was still on sale in Europe until 2010. Approximately 40,000 patients have received an ASR replacement in Europe, 380 of them in France, but more than 10,000 in Britain, before they were finally withdrawn in August 2010, All of these hip replacements were authorised in conformity with EU legislation under the aegis of the Single Market. Market surveillance and vigilance rules were also specified by the EU.One should note that the fabulous Single Market which has brought us these great successes is the very same that Mr Cameron so enthusiastically supports, and tells us is so necessary. The rules are now undergoing revision, and have been going through the process for four years, with further revisions also proposed. But, the relevant directives have already been amended many times. There is no guarantee this time that the EU will get them right this time. Even then there will be little comfort for the thousands of people left in agony, despite every single one of the hip replacements used being fully certified with the EU's CE mark, a mark of quality that is about as reliable as anything else the EU has on offer.

One wonders therefore, what it is going to take before people finally realise that the EU is not only driving us to ruin though weight of regulation, but also that the quality of its legislation is so poor that it fails completely to achieve its stated aims.

And when that day comes, what will we do then?