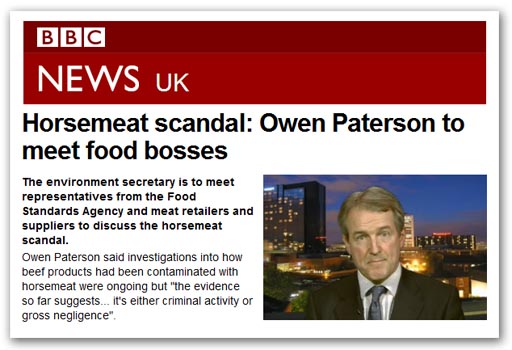 The horsemeat "scandal" grumbles on, with the media not even beginning to get to grips with the issue and its implications. Thus, we have Owen Paterson talking to a confused BBC, with the presenter trying, but failing, to make sense of it.
One of our own forum members (a retired policemen) puts his finger on it. He observes that the media wrongly refer to the supply system as "a food chain". It is not a chain. It is a network and like a network, the internet for example, when one or a number of hubs go down another route is quickly found and the whole thing carries on as before. If, as is suspected, criminality is involved, the crooks will always be at least one step ahead of enforcement agencies. I'd never thought of it so clearly in those terms ... one falls so easily into the "food chain" jargon. But he is absolutely right. The "network" is a much better way of describing it. And it is also a very porous network, with multiple entry points. The regulatory idea is that all the entry points (slaughterhouses) are policed. Everything passing down the chain is then recorded, so that what comes out at the other end is, theoretically, the same standard as what went in. Hence, as always the regulatory system is based on a false premise. The "network" is worldwide and impossible to police. No wonder the criminals are prospering. All they have to do is gain access to the "network". Once the meat is in the system, it is accepted at face value and no more checks are made. By the time the problem is discovered, they are long gone. It is also germane to remember that these frozen blocks of meat have a notional shelf-life of a year in normal commercial freezers. But in strategic storage at -40ºC - they can be thirty years old without any noticeable deterioration in quality. The meat could even be old, Soviet era strategic stocks that have been repackaged several times for all we know. Or the Mafia could be behind it. Italy is the biggest horsemeat producer in Europe. The meat could also be Mexican (slaughtered). There is a huge horsemeat trade in that country, where they also deal with US horses. Loads are shipped over to Europe, sometimes to provide cover for drug shipments. The drugs are put into distribution but the meat, which has no immediate buyer, is then held in cold stores and dribbled into the system, so as not to give the game away. What must be considered is that this stuff has been in the system many years, and has gone through multiple repackaging, so that its original identity has long been lost. If that is the case, it will be very difficult if not impossible to trace.

However, there are only a limited number of strategic cold stores. In the UK, most will be known to the authorities as they are very difficult to hide. But stocks could be anywhere in Europe, or even Russia. Already, we have seen the involvement of units in Ireland, the UK, France, Sweden, Luxembourg, the Netherlands and Poland.

Often being drug-related, the illegal meat industry is also well-organised – and ruthless. In investigations I carried out for television programmes (never broadcast), we took testimony from owners of slaughterhouses and cutting plants, on how it operates.

Most significant of the many lines we followed up, one cutting premises owner told of getting "a phone call" telling him he would receive a truck-load of meat. It was to be repackaged and relabelled to a certain specification.

And it was made very clear what would happen if the work was not done. This was not a request. You do not mess with these people. On the day, the truck arrives. The labels are supplied, complete with official stamps, and the work is done. Another truck arrives. Cash changes hands, the load is collected and that is the last of it, until the next one. The meat can then turn up anywhere in the world.

This is the criminal underbelly of the meat trade, and there are many variations. It used to be fairly local, small-scale and contained. But, with the advent of the Single Market, it has gone international, and multiplied in value. There is a huge amount of money in it, with just one container-load turning in over £100,000 profit.

What we are seeing, therefore, could well (and almost certainly is) be the tip of an iceberg. No one has yet addressed it – it turned out to be too dangerous to research for a television programme. But we are now seeing one of the side-effects of a flawed system.

COMMENT: "LET THEM EAT HORSE" THREAD
Posted by Richard at 11:15