We're sick of the lot of you 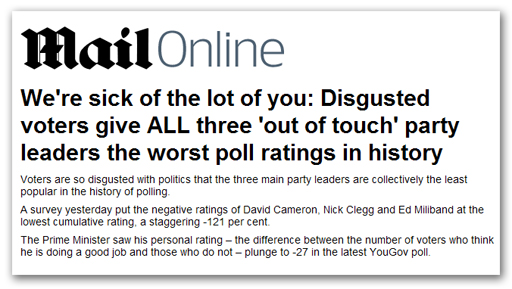 I really am beginning to enjoy the spectacle of the MSM catching up with the sentiment that has predominated on this blog and the forum for some years. One wonders though, why they have to hire polling organisations to find out what we've been telling them for free.

But, as we started yesterday with the news that the Tories are getting sick of their own leader, so we thought we would start today by reminding them that by far the greater majority of people have no time for any of the political classes.

What is really troubling, though, is that the likes of Tory Boy Blog and the MSM in generally still think the malaise can be cured with a few quick fixes.

We have, however, gone way past the point of no return. The political classes are going to have to agree to some fundamental changes before they even begin to recover some of their lost ground. And, as Witterings from Witney points out – in the first of several posts on this theme - it is for us to decide what is needed, not them.

There are just a few places left for the Old Swan meeting, at which WfW will be present. And there we frame our demands, in the style of the Chartists. In the meantime, comments on the forum are very welcome.