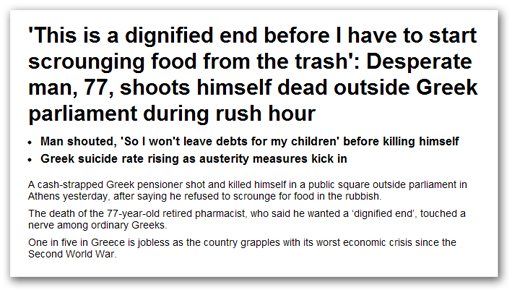 There is not much one can add to this story. Even as an isolated case, it would be bad enough but, according to the Greek Ministry of Citizen Protection, suicides increased by 22.5 per cent to 622 in 2010. And, over the previous two years, suicides have increased 40 percent as the worsening crisis drives ordinary Greeks to despair.

The Daily Mail has published the sanitised version of the suicide note but, according to the Athens News the full note read:


The Tsolakoglou government has annihilated all traces for my survival, which was based on a very dignified pension that I alone paid for 35 years with no help from the state. And since my advanced age does not allow me a way of dynamically reacting (although if a fellow Greek were to grab a Kalashnikov, I would be right behind him), I see no other solution than this dignified end to my life, so I don’t find myself fishing through garbage cans for my sustenance. I believe that young people with no future, will one day take up arms and hang the traitors of this country at Syntagma square, just like the Italians did to Mussolini in 1945.

The newspaper helpfully notes that the Georgios Tsolakoglou was the first collaborationist prime minister during Germany's occupation of Greece during the Second World War.

No one person is responsible, of course. But in the EU system of governance, no one at all is ever responsible. No one will take the blame, no one will be punished. The politicians will continue bickering, the eurocrats will continue to draw their salaries and pensions – and people die.

But a pensioner who puts a loaded gun to his head and pulls the trigger is sending a message. Thousands of miles away, that single pistol shot is heard. And, from the responses, we can draw our own conclusions. In due course, we will know what to do.