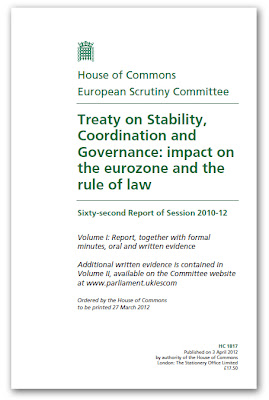 The Great William Cash has laboured mightily to deliver unto the world a 130-page report on the "Treaty on Stability, Coordination and Governance", assessing its "impact on the eurozone and the rule of law".

If you are particularly keen on Bill and his magnificent European Scrutiny Committee, you can also entertain yourself with a second volume of the same report, a more modest 15-pages. However, most people will lose the will to live after reading ten pages of the first volume, so I suspect this will go largely unread.

Of greater utility, therefore, is the one-page summary produced by the Press Association – the print equivalent of an inoculation, exposing the putative victim to a small, neutered dose of the disease, sufficient to trigger the immune mechanisms without making the recipient ill.

From this we can learn that the government was acting in a "profoundly unwise" way over the EU's fiscal pact, and was "taking both political and legal risks by suggesting the need for action while failing to explain how it will carry it through or what concessions it seeks".

One should be aware, however, that Bill is a closet Germanophobe, and this seeps out as he tells us: "The approach to this treaty provides further and ever more disturbing evidence of the European Union, in the context of increasingly coercive attitudes by Germany and France and the European establishment in pursuit of further and deeper political and legal integration, dangerously ignoring its own precepts for political ends".

Being succinct was never Cash's strong suit, so that is as good as it gets. But at least the Kermits take a bashing as well, while Cameron's "veto" is endorsed. Apparently, Bill could not bring himself to criticise The Boy, or take apart his non-veto.

"We conclude that the SCG Treaty would have been an EU treaty but for the veto and that the veto therefore was a real veto", says Bill, adding that the EU institutions and the governments of the 25 Member States who have signed the Treaty "have embarked on a dangerous precedent in seeking to attain their political objectives irrespective of the rule of law in the EU".

So there you have it: the veto was a "real" veto (as opposed to an unreal veto?). It wasn't – but I can't be bothered to argue. Bill has that effect, which is why he always wins every argument - and remains a backbencher.