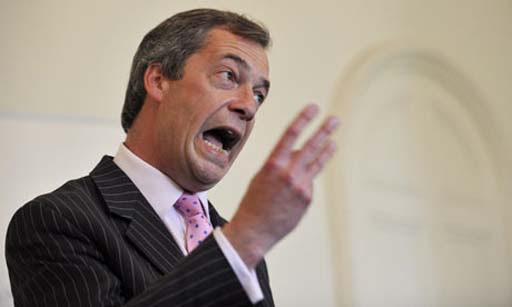 Completing an analysis of the last of a triumvirate of moronic pieces from the Fourth Estate, we now have an offering from Iain Martin, one of Britain's leading political commentators, who informs us that the rise of UKIP "is a nightmare for David Cameron".
The piece is a classic example of MSM arrogance, with Martin posing the question: "How much damage can UKIP do to the Tories?" In the context, it comes over as if no-one but Martin had ever thought about this, leaving the "leading political commentator" then to tell us mere mortals, soooo judiciously, that he is to "tempted to conclude that Conservatives should now be very worried indeed".

Then, just to show how clever he is, Martin gets a professor to volunteer the counterpoint, leaving the gay scribe's brilliance to shine through as he gravely informs us – wait for it – that "there is widespread discontent with the major parties, including amongst the kind of Tory-leaning voters Cameron needs to get back onside".

That's the thing about the MSM. They blunder around in their bubble, totally oblivious to the real world. And then, when a dose of reality breaks through and smashes them in the chops, they spit out the blood and take possession of the idea, as if they had personally discovered it.

Outside in the real world, however, we've been discussing the "UKIP effect" for years. It is that which heavily damaged the Tories in the 2005 election and probably cost them the election in 2010.

But the likes of the Gay Martin never venture out into the real world, so they never find out these things. And then, believing themselves to be the only ones who know anything, they come up with their brilliant stuff years after everyone else, and then call themselves "leading" political commentators.

That's why, if course, the Galloway result hit them between the eyes. They really are "hollow men", thin air occupying the space where grey matter should be.

The proof of that pudding is in the eating. No one but an airhead could suggest that the Conservative leadership got any mileage in the 2010 election out of playing the eurosceptic card, saying that "Cameron was determined to govern as a robust opponent of further EU integration". Martin does though.

Yet this was the election where Cameron broke his promise on the Lisbon referendum, which drove voters into the arms of UKIP. But so far from reality is Martin that he then asks the question as to whether playing the eurosceptic card will this time be believable - the inference being that it was, the last time it was played.

Thus, the real question, I suppose, is just how far out of touch can the Fourth Estate actually get? But then, on past performance, there is probably no known limit.