We're all in it together 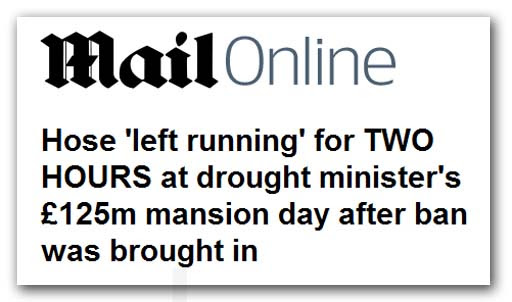 You really have to smile at this report, as multi-millionaire Richard Benyon, the Tory Minister in charge of water conservation, called in police after journalists from The People newspaper photographed water gushing from a hosepipe at his Elizabethan house on his 20,000-acre estate in Berkshire.

Benyon, one of the richest MPs in the Commons, also accused the paper's team of trespass and aggressive behaviour and said he had reported the incident to police. However, Thames Valley Police seem to have been less than sympathetic. A spokesman said: "The caller did not require police attendance and there is no further police involvement".

It was Douglas Reed, as I recall who wrote about the Tory propensity to claim that we are all in this together, all bundled together on the same train going to a common destination. But, he commented archly, that train has first, second and third class compartments.

Needless to say, Benyon is denying the claim, suggesting that a newspaper reporter turned on the tap. But none of our gifted hacks – famous throughout the land for their honesty and sense of fairness – could conceivably have done such a thing. In any case, the story is too good not to be true, and if it isn't, it should be.

What is doubly interesting though is that the hosepipe ban does not seems to be attracting any public or media support – far from it. Sentiment is broadly hostile. Hence you see inTelegraph letters a complaint that rationing is required because water companies refused to invest in infrastructure. Lack of rain is not the only problem, says the writer Martin Henry.

Adding clothes to the points we have made, he tells us that Essex, where he has lived for many years, has always been one of the driest counties. There are two main reservoirs, Abberton, recently enlarged, built in 1938, and Hanningfield, built in 1954. Since then the county population has grown from just over half a million to 1.7 million.

In a country where parts enjoy excessive rainfall, he then adds, it is unforgivable that we should have to endure water shortages due to the short-sightedness, incompetence and unwillingness of the water companies to invest in new infrastructure.

And nor has the Daily Wail finished. As hundreds of thousands of his customers struggle to cope with the hosepipe ban, Southern Water chairman Colin Hood can draw unlimited water from a stream that flows past his £1 million Scottish mansion, it tells us.

With such publicity, the water companies are going to find it hard going justifying the ban, and the politicians are not going to find it any easier. All we need is a few more fatuous ideasand patience may well snap.