Skulking in the shadows 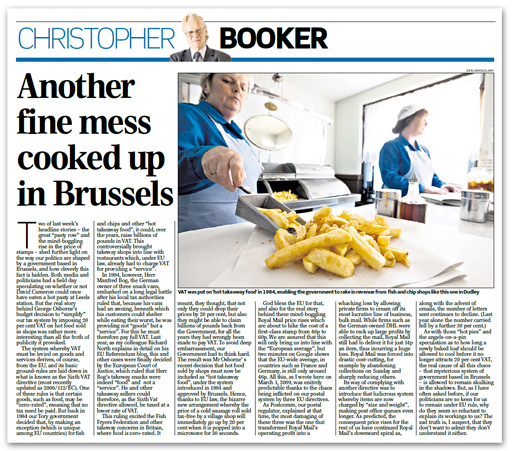 Ahead of the pack, but pipped by The Sun which went to press earlier, Booker breaks into the great pasty debate with the news on the EU link, details all too familiar to EU Ref readers.

One nice little detail offered by Booker, that has not found into way into many newspapers, is that the original decision to impose standard-rate VAT on fish and chips and other hot takeaway foods came in the 1984 Budget. It was then a Tory chancellor, Nigel Lawson, who decided to impose VAT, a move which, over the years, would raise billions of pounds.

In fact, though, under the Sixth VAT directive (most recently updated as 2006/112/EC), that move was probably even then contrary to EU law, in that only some but not all hot takeaway foods were taxed.

However, when the tax was introduced back in 1984, the idea was to tax takeaways in order to level the playing field with restaurants, which were already tax chargeable. There was no intention to tax hot food as such, but only a category of goods that could be defined as luxuries rather than necessities. Thus, unless the food had been heated specifically for the purpose of enabling it to be consumed hot, the exemption remained.

When the ECJ ruled on the Manfred Bog case in 2011, it now transpires that HMRC argued that nothing had changed in the UK situation as it was already treating the sale of hot food as the sale of goods. Zero-rating provisions formed a specific legal framework and since the UK had specifically legislated to exclude supplies of hot food from the zero rate, the higher tax had to be paid.

Thus did this point up the anomaly – some hot food was VAT-chargeable, but not to all. That was in breach of the VAT Sixth Directive, and had to be remedied. What had been started by one Tory chancellor had now to be fixed by another.

But, while we were trying to work out what had happened, most of the rest of the media and the politicians were frittering away their life energies, speculating on whether or not David Cameron could once have eaten a hot pasty at Leeds station.

Almost all of them are still missing the point that the bizarre new arrangement whereby the price of a cold sausage roll sold tax-free by a village shop will immediately go up by 20 percent when it is popped into a microwave for 30 seconds, is entirely thanks to EU law. No British chancellor is allowed to differentiate between different types of hot food. If some is taxed, all must be taxed.

As Booker then goes on to write, not only is the media missing the point here but it is also failing to pick up the real story behind those mind-boggling Royal Mail price rises, which are about to hike the cost of a first-class stamp from 46p to 60p.

As with those "hot pies", and the angels-on-a-pin speculation as to how long a newly baked loaf should be allowed to cool before it no longer attracts 20 percent VAT, the real cause of all this chaos – that mysterious system of government based in Brussels – is allowed to remain skulking in the shadows.

Booker tells us that he has often asked why, if our politicians are so keen for us to remain under EU rule, they so reluctant to explain its workings to the rest of us. The sad truth, he suspects, is that they don't want to admit they don't understand them either.

Sooner, they would prefer to pretend that they are still in charge – feeding off an equally ignorant media that also has little idea of how we are now governed.

At least now, though, courtesy of Booker, Sunday Telegraph readers will be acquainted with the truth. Meanwhile, one commenter offers advice on how to work out the origin of new "British" laws and ideas. Simply ask whether they are damaging to Britain in some way, and include the word "simplify".

It the answer is "yes", then the law has come directly from Brussels.