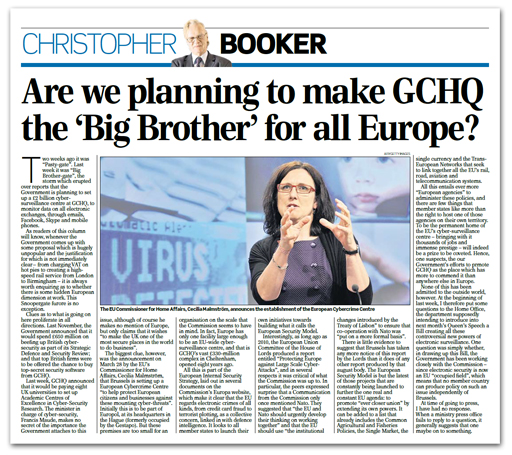 First it was Dellers and now it is Booker, each with their own take on "Snoopergate". Putting it very neatly into focus, Booker tells us that, whenever the Government comes up with some proposal which is hugely unpopular and the justification for which is not immediately clear – from charging VAT on hot pies to creating a high-speed rail service from London to Birmingham – it is always worth inquiring as to whether there is some hidden European dimension at work.

And that is exactly what we did, coming up first with this and then this. And it wasn't at all difficult to put together the pieces. Clues as to what is going on, writes Booker, proliferate in all directions. Last November, the Government announced that it would spend £650 million on beefing up British cyber-security as part of its Strategic Defence and Security Review; and that top British firms were to be offered the chance to buy top-secret security software from GCHQ.

Last week, GCHQ announced that it would be paying eight UK universities to set up Academic Centres of Excellence in Cyber-Security Research. The minister in charge of cyber-security, Francis Maude, makes no secret of the importance the Government attaches to this issue, although of course he makes no mention of Europe, but only claims that it wishes "to make the UK one of the most secure places in the world to do business".

Then came the biggest clue of all. This was the announcement on March 28 by the EU's Commissioner for Home Affairs, Cecilia Malmström, that Brussels is setting up a European Cybercrime Centre "to help protect European citizens and businesses against these mounting cyber-threats".

Initially this is to be part of Europol, at its headquarters in The Hague (formerly occupied by the Gestapo). But these premises are too small for an organisation on the scale that the Commission seems to have in mind. In fact, Europe has only one facility large enough to be an EU-wide cyber-surveillance centre, and that is GCHQ's vast £330-million complex in Cheltenham, opened eight years ago.

All this is part of the European Internal Security Strategy, laid out in several documents on the Commission's Europa website, which make it clear that the EU regards electronic crimes of all kinds, from credit card fraud to terrorist plotting, as a collective concern, linked in with defence intelligence. It looks to all member states to launch their own initiatives towards building what it calls the European Security Model.

Interestingly, as long ago as 2010, the European Union Committee of the House of Lords produced a report entitled "Protecting Europe against Large Scale Cyber-Attacks", and in several respects it was critical of what the Commission was up to.

In particular, the peers expressed surprise that a Communication from the Commission only once mentioned Nato. They suggested that "the EU and Nato should urgently develop their thinking on working together" and that the EU should use "the institutional changes introduced by the Treaty of Lisbon to ensure that co-operation with Nato was "put on a more formal basis".

There is, says Booker, little evidence to suggest that Brussels has taken any more notice of this report by the Lords than it does of any other report produced by that august body.

The European Security Model is but the latest of those projects that are constantly being launched to further the one real and constant EU agenda: to promote "ever closer union" by extending its own powers. It can be added to a list that already includes the Common Agricultural and Fisheries Policies, the Single Market, the single currency and the Trans-European Networks that seek to link together all the EU's rail, road, aviation and telecommunication systems.

All this entails ever more "European agencies", in this case the European and Information Security Agency, to administer these policies, and there are few things that member states like more than the right to host one of those agencies on their own territory.

To be the permanent home of the EU's cyber-surveillance centre – bringing with it thousands of jobs and immense prestige – will indeed be a prize to be coveted. Hence, one suspects, our Government's efforts to promote GCHQ as the place which has more to commend it than anywhere else in Europe.

In the scheme of things, however, none of this has been admitted to the outside world. At the beginning of last week, therefore, Booker put some questions to the Home Office, the department supposedly intending to introduce into next month's Queen’s Speech a Bill creating all these controversial new powers of electronic surveillance.

One question was simply whether, in drawing up this Bill, the Government has been working closely with the Commission – since electronic security is now an EU "occupied field", which means that no member country can produce policy on such an issue independently of Brussels. At time of going to press, we had had no response. Thus does Booker conclude: "When a ministry press office fails to reply to a question, it generally suggests that one is may be on to something".

He is not wrong.