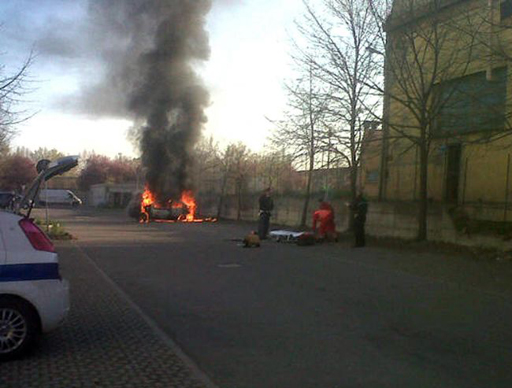 The tragic suicide of a pensioner, reacting to the austerity measures, is a phenomenon not confined to Greece.

The same thing is happening in Italy (use Google translate). In the last week alone, four or five between entrepreneurs and pensioners have killed themselves. One set himself on fire in front of a tax office (pictured above). An Italian reader tells me that a good friend of his, very successful real estate developer and fellow pilot, shot himself in 2010.

The reader also draws my attention to another article in il Giornale, on the fate of a committee set up to offer recommendations on how to cut MPs' salaries. After seven months of heroic work, at untold cost to the hard-pressed Italian taxpayers, the committee declared it an impossible task. Nothing has been achieved, says the paper. The yield? A white flag.

"We throw in the towel," the committee said. The MPs' salaries are the highest in Europe but they should not be cut, the members concluded. And they have disbanded the committee. No wonder taxpayers are committing suicide in droves. One might prefer, though, that they contemplated homicide.

UPDATE: The phenomenon is also affecting Ireland, reports the Irish Times. According to Kathleen Lynch, Minister of State for Health, Ireland's suicide rate was the highest in history. Provisional figures for 2009 indicated an increase of four percent to 527, the highest number ever recorded.

"The increase is mainly in men in the middle-age group", said Ms Lynch. "However, we are also seeing a rise in the number of women dying by suicide, although the numbers are still significantly lower than in men".

Ms Lynch said total funding to support suicide prevention initiatives was in the region of €8.7 million. Undoubtedly, she added, the economic position was having an effect on people's mental health and wellbeing. "The impact of unemployment and the strain of financial difficulties on physical and mental health are well-known", she added.

COMMENT: "A DIGNIFIED END" THREAD
Posted by Richard at 12:39