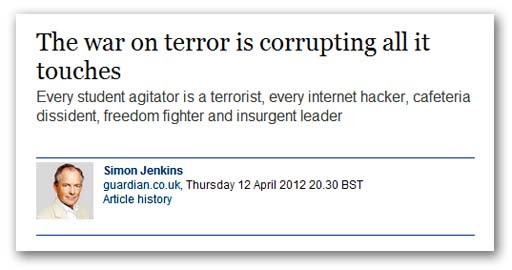 Raedwald this morning picks up on the column by Simon Jenkins, commenting on Monday's BBC Panorama programme.
The programme, says Jenkins, substantiated an extraordinary allegation that suggested how far the war on terror has descended into legal abyss. The claim was that MI6 "rolled the pitch" for Tony Blair's bizarre 2004 hug-in with Libya's Colonel Gaddafi by apparently arranging for the CIA to kidnap Gaddafi's opponent in exile, Abdel Hakim Belhaj.He was seized in Bangkok, where he and his wife were en route to Britain. It has been suggested they were "rendered" via the British colony of Diego Garcia to Tajoura jail in Tripoli. Belhaj spent six years, and his wife four and a half months, at the tender mercies of Gaddafi's security boss, Moussa Koussa. Belhaj's pregnant wife was taped like a mummy on a stretcher, and he was systematically tortured.What is especially chilling, though – in a jaw-dropping piece – is Jenkins's account of the role of the court of appeal in London, "mesmerised by the war on terror". It has declared that the war on terror embraces "acts by insurgents against the armed forces of a state anywhere in the world which sought to influence a government and were made for political purposes".Under legislation, terrorism included not just acts of violence but any threat made for "the purpose of advancing a political, religious, racial or ideological cause". These threats might include nothing more than a "serious risk to public health and safety" or "seriously to disrupt an electronic system".What worries Jenkins is that under this "catch-all lexicography", dissidents and insurgents under any regime were not excluded. There is nothing that would exempt those engaged in attacks on the military during the course of insurgency from the definition of terrorism. It was hard luck all Kurds, Kosovans, Benghazians, Tibetans and Iranian exiles – and today's Syrian rebels. They are all terrorists.By this doctrine, every student agitator is a terrorist, every internet hacker, cafeteria dissident, freedom fighter and insurgent leader. The war on terror, Jenkins concludes, is corrupting all it touches, while parliament meekly passes each twist of the ratchet of repression.And there is the story of our times. In safeguarding our rights and liberties in general, we rely especially on two institutions – our courts and parliament. When neither function to challenge the executive, and keep it in check, it is time to worry.COMMENT THREAD
Posted by Richard at 09:48