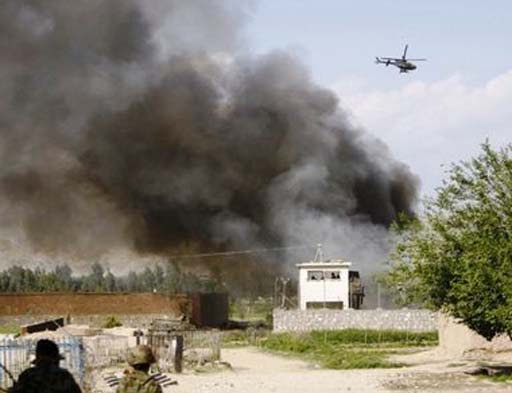 I've never been one for parallels between the Afghan insurgency and the VietNam War. After all, the latter was a corrupt government supported by the US, against the people who were fighting a vicious insurgency, with the assistance of a cross-border power. So you can so that there are no real similarities.

However, with the co-ordinated raids in Kabul, the Taliban having launched tightly choreographed attacks on military bases, embassies and the parliament, one cannot help but recall the 1968 Tet offensive by the Viet Cong.

Militarily a defeat for the insurgents, it was presented by the media to the US public as a major defeat and fuelled anti-war sentiment that eventually led to the withdrawal of US forces.

Most powerful of all the media commentary was Walter Cronkite in a CBS special, when he concluded that: "To say that we are closer to victory today is to believe, in the face of the evidence, the optimists who have been wrong in the past. To say that we are mired in a bloody stalemate seems the only realistic, yet unsatisfactory conclusion".

No figure of similar stature in the US media now exists, but the sentiment is not dissimilar. Whatever optimism might emerge from the military ranks, the civilians back home are convinced that we are bogged down in a never-ending struggle than cannot be won.

Michael O'Hanlon, writing for CNN World believes the current offensive is a propaganda ploy by the Taliban, and that we shouldn't fall for it. The attacks were only moderately effective and suppressed almost entirely by Afghan forces.

But O'Hanlon does not know his history, or understand the dynamics of modern insurgencies, those where indigenous government are kept in power by external forces. These are not won or lost on the battlefields, but in the hearts and minds of the peoples of the donor countries – those that supply the forces to keep the regimes in place.

Long ago, that battle was lost, not least because so few people here - and in the United States, for that matter - believe what their governments say. And, as far as the UK goes, the MoD is as inept at publicity as its military Brass are at fighting the Taliban. They too have lost any credibility.

Thus, whatever the outcome, this current offensive will be read as another failure of the security forces, and as another reason why we should withdraw our forces as soon as possible. Whatever else happens, it is just detail.