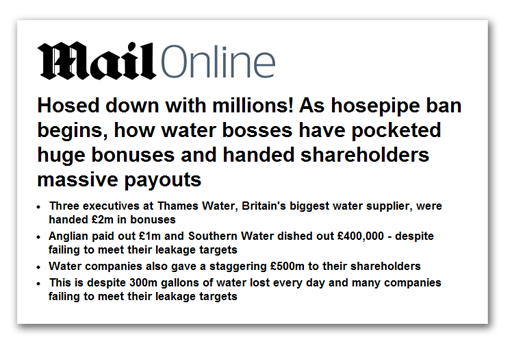 As the hosepipe ban comes into force in six water regions in the UK, the water companies have more or less successfully convinced the MSM that there is a genuine water shortage, rather than a chronic lack of investment in new capacity and leak reduction.

However, the Daily Wail has been fairly robust about the leakage issue – if a little unfocused, and now it is brining to light the profligacy of the water company directors in lining their own pockets and keeping their shareholders sweet.

What is especially offensive is that Thames water - despite losing nearly 32 percent of the water it delivers, more than the current shortfall which gives rise to the hosepipe ban – is paying three of its executives £2 million in bonuses, with chief executive Martin Baggs taking home £1.67million in 2010/11.

Anglian Water paid out £1m in bonuses, and Southern Water dished out £400,000 - despite both companies failing to meet their leakage targets. And, despite the lack of investment in the infrastructure, shareholders nationally were rewarded with £500 million.

Basically, "customers" are being ripped off by companies which are exploiting their monopoly power to extract increasing charges for little return. Add to this the £65 billion largely wasted on unnecessary EU directives, and it is inevitable that we would eventually be in the mess we are experiencing.

And despite that, water company profits have soared since privatisation in 1989 as a string of financial conglomerates have bought and sold the utilities in quick succession. 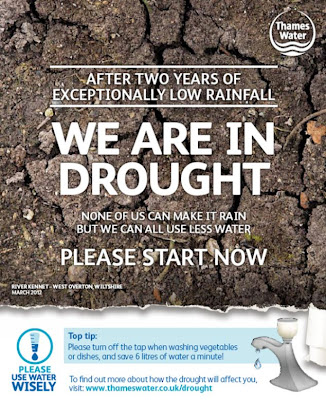 Anglian Water – which serves five million customers in one of the worst-hit drought areas – announced profits of £70 9million last year. This was around double the 2008 figure. Thames was bought by the Australian firm Kemble Water after a disastrous few years under German firm RWE which bought the company for £4.8 billion in 2000, and sold it for around £8 billion six years later.

To add insult to injury, the water companies then put up misleading posters (illustrated right), blaming the lack of rainfall for the current ten percent shortfall in stored water, when immigration has increased the population by over eleven percent since the 1980s, for which absolutely no provision has been made.

And now, having robbed their customers blind, the companies are failing to deliver the product for which they have been paid, while the government happily rolls over and turns water users into criminals, if they actually use their hosepipes. That has to be the ultimate insult, when the real criminals – the water thieves, enjoy their bonuses and get away with their neglect.