We know he's not that stupid 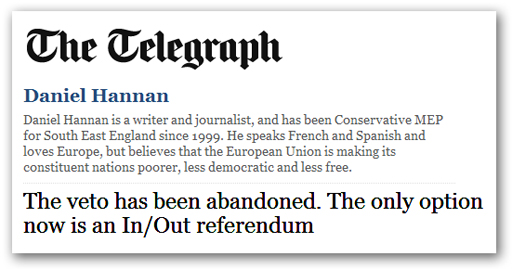 We don't have a great deal of time for Myrtle, but we know that he is not this stupid. The only thing we can surmise is that he has been kidnapped, with the villain taking over his blog and impersonating him.

The Hannan I knew had brains enough to know that were was no veto, and that the answer to the current mess is not an in/out referendum.

One assumes that the kidnapper(s) must be linked in some way to People's Pledge, as this is the outfit that is being promoted, one that is wasting good money on something we are unlikely to get and which, if we did, we would probably not win. 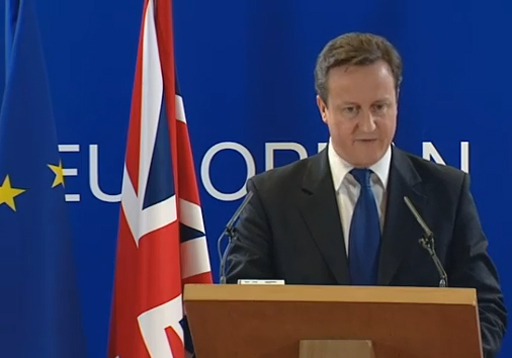 But what do we make of this man, a man who is now maintaining that he did veto the EU treaty? "We vetoed an EU treaty in December," he says. "Nothing changes the fact that we were confronted by an EU treaty and we vetoed that treaty", he says. "There isn't a Brussels EU treaty, it doesn't exist, I vetoed it", he adds, then re-emphasising the point in response to a BBC questioner: "There isn't an EU treaty because I vetoed it".

The man is even now contradicting his own spokesman. The Smethurst said: "There was … no text of a Treaty which was vetoed; it was rather the process of amending the European Union Treaties to this end which was vetoed".

Yet the media – during the press conference - didn't challenge these amazing assertions. Some of the questions following The Boy's statement were even about bankers' bonuses. That is the media for you, the Fourth Estate, guardians of democracy, swooning all over the man. Truly pathetic. But then, there's no swoon like a media swoon, writes Peter Hitchens.