A failure of regulation 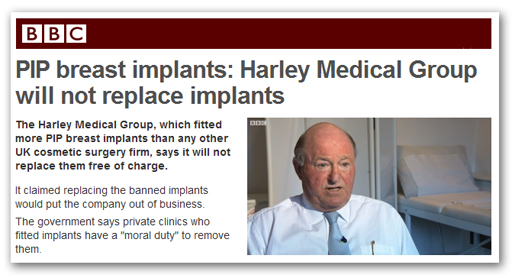 In an interesting twist to the ongoing "breast implants" drama, the BBC reports that the Harley Medical Group, which fitted more PIP breast implants than any other UK cosmetic surgery firm, says it will not replace them free of charge. It claims that replacing the banned implants would put the company out of business.

On the other hand, the government says private clinics which fitted implants have a "moral duty" to remove them, a stance which is disputed by Mel Braham, chairman of the Harley Medical Group.

He says the government must accept "moral responsibility" for replacing the PIP implants. "We're only sitting here today because the Medicines and Healthcare products Regulatory Agency (MHRA), their own regulatory authority, has approved these implants and obviously hasn't done their proper checking".

He adds: "We're an innocent victim like everyone else, we're attempting to do our best for our patients", then asserting: "We can't take on this whole thing on our own, especially when it wasn't our fault".

Braham is not on his own. Nigel Robertson, the head of the cosmetic surgery firm Transform, says: "Private sector providers with large volumes of patients do not have the resources to ensure the removal and reaugmentation of all PIP implants free of charge".

He then declares that the government plans are "unworkable" and again blamed "a catastrophic failure of the regulation" by the MHRA.

And these two men are right to pin the blame on a regulatory failure. But the failure goes much further than the MHRA. It strikes at the very heart of the regulatory system which is wholly a creature of the European Union.

At the front end, however, the MHRA describes itself as "the government agency responsible for ensuring that medicines and medical devices work, and are acceptably safe" and tells us that it keeps watch over medicines and devices, and takes " any necessary action to protect the public promptly if there is a problem".

The MHRA itself exercises control through detailed legislation, which currently includes four sets of Medical Device Regulations. These, though, simply implement EU Medical Devices Directives and amendments, specifically the Council Directive 93/42/EEC of 14 June 1993 concerning medical devices. This has been amended many times with a consolidated version also available, the latest amendments coming into force in the UK in March 2010.

The central part of the legislation - part of the Single Market corpus - is a system of prohibition from marketing unless the product (or "device") conforms with detailed technical standards, with assured manufacturing and quality control measures in place, subject to ongoing inspections and approval by the regulatory authorities. If all conditions are met, the device is awarded a CE mark, which acts as a marketing authorisation.

As regards breast implants, these are covered by the Directive, the applicable standard being EN ISO 14607:2009 which refers to "Non-active surgical implants - Mammary implants". The particular requirements are set out in ISO 14607:2007.

The trouble is that these particular implants were manufactured in France and therefore came under the control of the French authorities. They actually shut the firm down last year, but not before 40,000 British women had been fitted with the implants.

Herein lies the problem. The British agency, ostensibly responsible for maintaining standards in the UK, is also obliged under EU law to permit the import and marketing of any device which bears a CE mark, even though it has no direct jurisdiction over the manufacturer.

Furthermore, unless it has direct evidence to suggest that there might be something wrong, the MHRA is not even allowed to carry out its own tests to ensure that imported products bearing the CE mark conform with the required standards.

Thus, the actual failure rests with the French authorities, who approved a substandard product, and allowed as many as 300,000 to be sold. But the ultimate failure rests with EU legislation which has created a system which is beyond the control of the British authorities, and enables substandard products to be marketed in the UK, with no domestic checks.

Bizarrely though, health secretary Andrew Lansley cannot admit to what amounts to the failure of the Single Market, so beloved of Tory politicians and the Dear Leader. "Every provider has a responsibility to put things right," he says, without mentioning the EU. He then adds: It is not fair for the taxpayer to foot the bill and that if the NHS was forced to remove an implant "the government would pursue private clinics to seek recovery of our costs".

Certainly, it would be unfair for the taxpayer to foot the bill, but Lansley needs to focus on where the blame really lies – first in Paris with the French government, and then in Brussels, which has foisted us with a dangerous and unworkable system.

Lansley has announced a review of how the situation emerged in the UK: "The blame for what happened lies with PIP, but this review will enable us to learn lessons to improve future regulatory effectiveness," he says. But he has no powers in this matter, and nor can his remit extend to looking at the French failures.

The competence rests with the French government and the EU commission, and his only remedy is to go cap in hand to Brussels to beg for improvements, the current code being: "We will be working closely with other health departments and regulators in Europe to consider whether there are wider implications for the regulation of implants and other medical devices".

The worst of it is that there are no regulatory changes that can be made that will improve the situation. Back in July 2004, we made the point that drug companies (and by inference, device manufacturers and surgical users), as a rule, actually favour tight regulation. The "market authorisation" (and CE marking) effectively insulates producers from claims by users who have been harmed by their products – as anyone who has tried to sue a drug company will readily attest.

And so it is today. Without legislative intervention, Common Law "duty of care" provisions would apply and every affected woman would be entitled to a remedy from her supplier (the fitting clinic).

But all we get from this complex web of EU law is an egregious failure which blurs responsibility and makes it more difficult for those affected to gain a speedy resolution - enabling the likes of the Harley Medical Group (rightly) to duck the blame.

Yet this is another of those wonderful benefits of our membership of the EU – and another reason why we should leave.