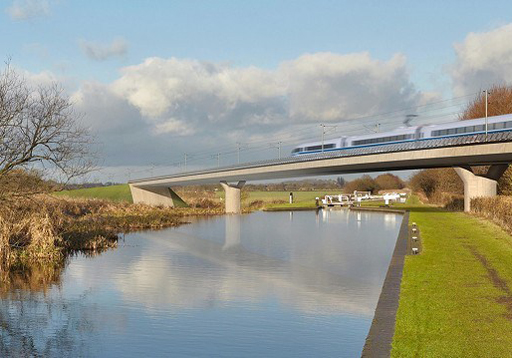 With the formal approval for HS2 high-speed rail scheme in the bag, we can now look forward to another of those grandiose schemes, so beloved of politicians, this one aimed at spending £32.7 billion by 2026, to have 1,200 ft-long trains capable of holding 1,100 passengers, whisking them on a 140-mile route from London to Birmingham in just 45 minutes.

However, we are also informed that, once the network is complete, a trip from Birmingham to Paris will take just over three hours, compared with four at present. And with extensions further north, a direct train service from Leeds and Manchester to Paris will then take three and a half hours – a saving of one hour. This much improved access to the continental rail system will be possible, according to the Failygraph:


… thanks to the decision to include a direct link between the new high speed line and the existing track from London to the Channel Tunnel in the first phase of the project, which was the biggest surprise in the Transport Secretary's announcement.

Immediately, the finely tuned nasal apparatus detects a highly odiferous rodent, one picked up in November by Witterings from Witney, which goes under the name of the EU's Trans-European Network (TEN). Through this scheme, says WfW, the United Kingdom is being integrated within the European Union state in ways that are not publicised.

The man is right in one sense. We are being integrated within the EU, but there is no secret about it. The TEN has been a key part of EU policy, since the scheme was presented by Jacques Delors – then EU commission president - to the European Council in Brussels on 11-12 December 1993.

Delors was concerned to present a big idea to cure "Europe's structural unemployment" and, at the same time to demonstrate the supposed benefits of "Community action".

The "big idea" he presented to the Council was a massive scheme of public works which he equated to the "New Deal", a scheme to build the "trans-European infrastructure", interconnecting energy transmission systems and a series of cross-border road and rail projects, of which high-speed trains were a major part.

Originally expected to cost about £260 billion, the core idea was to provide a massive boost in employment, but there was no element of compulsion. The EU commission could only provide "guidelines" and help co-ordinate the plans of individual member states, using the budget to part-finance some of the schemes in the less-developed areas.

Even then, the EU was not alone. So gargantuan was the scheme that even the United Nations got involved through UNECE, which produced its own Master Plan. However, it was also absorbed into the Lisbon Strategy and plays an equally central role in the attainment of the objectives of the Europe 2020 Strategy, both of which the UK fully supports.

Thus it is that the UK has "volunteered" to spend huge amounts on completing the British end of the TEN, attracting the warm approval of the "colleagues", but initiated primarily because the political classes all have similar thought processes, and have agreed to act together.

This I advanced as the "mindset conspiracy", arguing that you could take individuals from the political classes across Europe, separate them and place them on their own desert islands. But, give them the same inputs and, entirely separately, they would make exactly the same decisions. There is no conspiracy as such, but the effect is the same.

Nevertheless, once a member state decides to provide a facility, compulsion does kick in, through Council Directive 96/48/EC (as amended). This, together with other instruments, requires interconnection and interoperability of national networks as well as access to such networks.

If there was any surprise in the Transport Secretary's announcement that the scheme should be linked to the European network, there should not have been. The moment the administration had decided to go ahead with HS2, a connection would have been mandatory.

The scheme itself, though, is a national own goal, and underlines the problem we have with withdrawing from the EU. You can take Britain out of the EU, but it is not so easy taking the EU out of the British government. The minds of the "colleagues" and our politicians and civil servants are so perfectly attuned.

The ironic thing is that, if the government was that concerned to improve the transport system and create thousands of jobs, massive works are required to eliminate the epidemic of potholes, with an estimated price tag of £13bn.

But such an option – for which the hard-pressed motorists have already paid – would never fly. It lacks the glamour and the photo-opportunities afforded by HS2, and would actually do some good. This, the politicians could never allow.