The perils of referendums 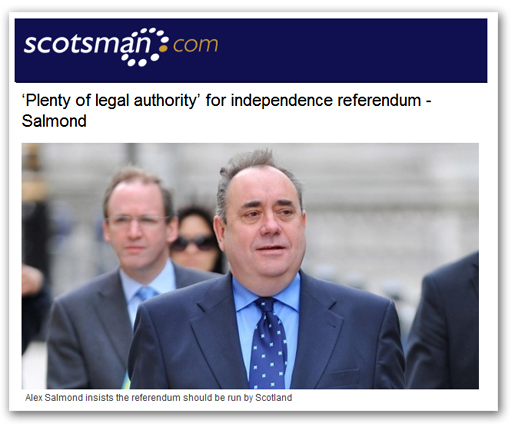 It is easy to be suspicious of the sudden rush of publicity over the timing of a referendum on Scottish independence, especially as the basis of the argument seems thin.

Given how reluctant The Boy is to have a referendum on EU issues, his enthusiasm for referendums on other subject and his keenness to have an early referendum on this issue, one wonders whether this is, in part, a diversionary tactic to keep the media and the voters entertained and preoccupied - and away from more sensitive issues.

What does come over, however, is that all parties to the current dispute appear to think timing is important, underlining the fragility of ad hoc referendums as a tool of direct democracy.

As long as the politicians have control of the process and are able to decide whether a referendum is held on any particular issue, the timing of a vote and the question(s) to be asked, the people are not really in control. The whole process is far too easily manipulated.

On the subject of Scottish independence, there is an element here of bald men fighting over a comb. Increasingly, the "big decisions" are taken by the EU, and that will remain the case even if Scotland does break away.

Thus, the choice for the Scots is whether they are ruled on local matters by London or Edinburgh, when for many the preference is neither. Salmond does not really speak for Scotland, and the fate of the Union is far too important to be left to the machinations of this self-serving politician.

On the other hand, if the Scots really do want full independence, then it is in our interests to see an orderly transition, if for no other reason than we can then have a guilt-free gloat as we cut off their £26 billion annual subsidy, and watch their lights go out as Salmond's windmills fail to perform.

For the time being though, we the people assume our traditional posture as spectators, while the politicians play their games, deciding on when to allow the Scottish people their bit-part to endorse what has already been decided for them.

Whichever way the charade goes though, it should not be confused with democracy.